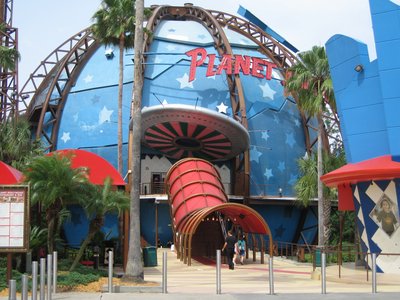 Disney Springs is a section of the Walt Disney World property dedicated to shopping, dining, and liver entertainment. The area features numerous restaurants for guests looking to add variety to the resort and theme park options. It is also a great destination for adults seeking a night out, with a number of restaurants and entertainment venues geared toward an older crowd than much of Walt Disney World.

With over a dozen restaurants from which to choose, it is a good idea to have an idea of where you are headed before you venture to Disney Springs in search of a meal. Here is a brief guide to all of the downtown restaurants to help you narrow things down!

The House of Blues is a restaurant and a live music venue featuring concerts on a near nightly basis.  It features a menu created by Food Network celebrity chef Aaron Sanchez. Southern American classics with an international twist are featured for lunch and dinner. The House of Blues also hosts the weekly (and very popular) Sunday Gospel Brunch, with performances by top gospel groups and a tremendous Southern-style buffet.

With four distinct dining experiences from which to choose, Wolfgang Puck is almost like four different restaurants. Guests looking for a formal meal may reserve a table at the Dining Room to enjoy an Asia and California inspired menu in an elegant setting. The Wolfgang Puck Cafe offers a more casual environment and simpler variations of a similar cuisine. The Express-Marketplace offers quick service “gourmet express” meals, while the B’s Lounge and Sushi Bar has sushi and cocktails.

One of several Disney Springs dining establishments with celebrity connections, Bongos Cuban Cafe was created by Latin music star Gloria Estefan. It has the bright colors and lively music of a Havana nightclub, and serves classic Cuban dishes such as seafood paella and Cuban sandwiches.

Wetzel’s Pretzels is a casual stop for a snack or a quick meal on the go. The stand serves seven kinds of hand rolled pretzels, hot dogs, lemonade, and Haagen-Dazs ice cream.

The glowing blue sphere and bright neon sign have made Planet Hollywood restaurants easily recognizable all over the country. This restaurant is all about the decor, with three levels featuring memorabilia from the films and television shows of Hollywood. The restaurant serves American cuisine such as steak and pasta for lunch and dinner.

Another Irish destination, tiny Cookes of Dublin is the place to grab a quick plate of fish and chips or a meat pie.

Portobello is an elegant restaurant in the style of an Italian trattoria. Not just one but three notable chefs created the menu at Portobello, choosing from classic dishes of the Italian countryside. Guests can compliment their entree with a selection from the extensive wine list, featuring wines from Italy as week as well as the United States.

Fulton’s Crab House is one of the most beautiful places to dine in Disney Springs. The restaurant is located on board a replica of an elegant riverboat that is permanently docked along the waterfront. The menu includes over 50 entrees featuring selections of fresh seafood, and also contains a number of non-seafood alternatives.

This enormous restaurant has seating for nearly 1,000 guests in various rooms exploding with prehistory. From a room full of towering Dinosaurs that move and speak, to a bar sheltered by the tentacles of a giant octopus, T-REX is treat for all your senses, not just your sense of taste. An ice cave room includes the frozen skeleton of a Tyrannosaurus Rex, while the Kitchen of Fire shoots flames out of its roof. Periodic meteor showers darken the sky with an impressive overhead display. If you manage to take a moment to look down at the menu, you will find a wide selection of standard American dishes.

This chic restaurant features cuisine from across the Americas, North, Central, and South. It gets its name from the tequila bar that features 37 different varieties of tequila. In addition to tequila, Paradiso 37 also features an international wine bar.

This popular and well-regarded sandwich shop features 13 variations on the hot sandwich, as well as salads, wraps, and several dessert options. In the morning, the shop sells a variety of baked goods for breakfast.

The Rainforest Cafe was created by the same people who created the T-REX Cafe, and the two restaurants provide similarly detailed themes and an interactive experience. Filled with jungle flora and fauna as well as large cylindrical salt water fish tanks, the Rainforest Cafe is full of the sights and sounds of the Rainforest. Indoor waterfalls, animal noises, and an always busy dining room make this a fun and rowdy place to dine. Periodic thunderstorms complete with darkening skies, lightening, and rain fall add even more excitement to the dining experience.

These days, the name of Cap’n Jack’s may remind guests of a certain popular character from the Pirates Of The Caribbean Disney film franchise. In fact, Cap’n Jack’s Restaurant was serving seafood favorites such as crab cakes and other American dishes well before the first film was released. This casual restaurant includes a lounge featuring signature strawberry margaritas.

Pollo Campero features Latin dishes such as citrus-grilled chicken, yucca fries, and plantains, with popular Latin beverages like horchata and sangria. Fresh A-Peel was created by Pollo Campero operates out of the same location. It offers healthy dishes such as salads and wraps, and gluten-free baked goods.

Also operating in the same location as Pollo Campero is the Babycakes NYC Bakery. This bakery has fresh-baked vegan items.  If you have both a sweet tooth and some special dietary restrictions, this is a place to check out.