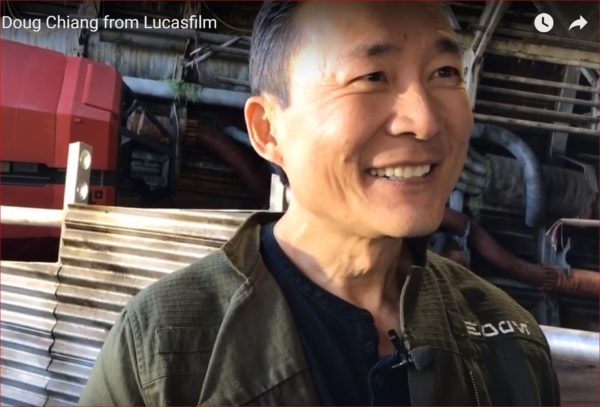 Interview with LucasFilm’s Doug Chiang on Rise of the Resistance

Doug Chiang is an award-winning designer. He joined LucasFilm in the late 1990s as the Design Director for both Episode I and Episode II. He also worked as the production designer for Polar Express and founded DC Studios in 2000. He recently returned to the Star Wars franchise as a concept artist for the Force Awakens and as a production designer for Rogue One.

I got to interview Chiang about his five-year-long contribution to Rise of the Resistance, courtesy of the nice folks at Disney Media Relations.

In brief, Dough Chiang says that he is excited about the result of their hard work.  The media preview day, December 4, was the first time he personally experienced the attraction from beginning to end.

He praised both LucasFilm and WDI for working so well together to create a product that combines a believable storyline with realistic physical experience similar to the special effects you would see in a feature film. We even learn that there’s a hidden Mickey in one of the control panels in the corridor! Can you find it?

What is your favorite detail about Rise of the Resistance so far?