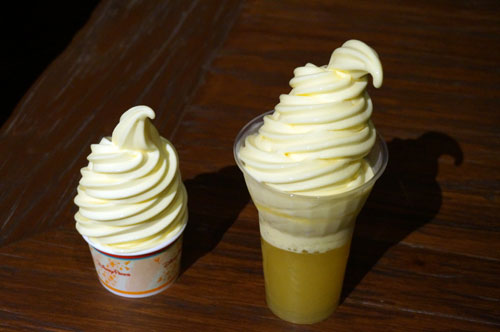 The Dole Whip just might be the most popular dessert in the Disney Parks.  Sorry Mickey ice cream bar!

It’s served not only in Disney World but also in Disneyland, and the lines are often quite long.

So, what’s the real deal with this sweet treat? Let’s take a look at the top five Dole Whip facts.

1. It’s been around a while

Rumor has it that Dole created the Dole Whip in the 1950s. It became popular in Disneyland after it was first served in 1976 at the Enchanted Tiki Room. When it came to Disney World, it only grew in popularity, and I can’t remember a time when Dole Whip wasn’t available in Disney World.

There aren’t many places you can get a Dole Whip. In fact, there are only a few places in Walt Disney World where it’s available.

Outside of the parks, Disney’s Polynesian Resort‘s Pineapple Lanai is the only other place on property that you can buy a Dole Whip.

You can also sometimes find it in Epcot during festivals. Check the food carts that pop up during these special events. That’s usually where you’ll find it – sometimes spiced up with adult beverages!

By many estimates, Disney serves over one million Dole Whips everyday. Wow!

Considering that it comes in many varieties including in a cup or as a float, mixed with pineapple juice or swirled with vanilla ice cream, or made with rum for the adult readers, there’s a Dole Whip to satisfy everyone!

Since the Dole Whip is mostly pineapple juice, it’s a pretty healthy snack relative to many other Disney alternatives.

This sweet treat is made of puree and reconstituted water with coconut oil and some natural and artificial flavors, but there’s not much else to it. The best part is it’s only 90 calories!

If you’re lactose intolerant, rejoice because the Dole Whip is dairy free even though it looks like soft serve ice cream.

Besides Disney Parks, there aren’t many places to buy Dole Whip unless you live in Hawaii where the Dole Plantation is. However, you can purchase the dry mix online and have it shipped to your home where you can make it by just adding water!

Dole sells the dry mix by the case or by the bag. It comes in orange, strawberry, mango, pineapple, and lemon flavors, and it’s sure to satisfy your desire even if you can’t make it to the theme parks.  Still, I think Dole Whip at Disney World tastes the best!

Are you a Dole Whip fan?