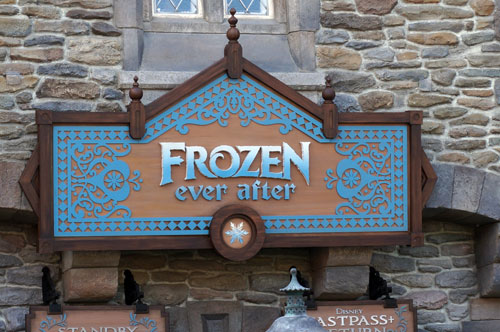 Epcot No Longer Frozen in Time – Is That OK?

Epcot has consistently been the slowest growing theme park even though it’s Disney World’s second most visited and the world’s 6th most visited. Disney is hoping that that’s going to be changing though.

Within the last month, Epcot opened two rides: Soarin Around the World and Frozen Ever After. Soarin is an expansion of an existing ride with a new film and Frozen Ever After is a makeover of sorts. There are also rumors in the mill about Universe Of Energy closing after the summer season to reappear later as a Guardians of the Galaxy attraction.

For now, let’s focus on Frozen.

When Anna and Elsa made their first appearance in Disney World, wait times reached five hours or more. Guests were exhausted, frustrated, and elated when they finally met the princesses!

When Disney announced that Maelstrom would receive a Frozen makeover, some guests were excited but others were even more frustrated.

Sure, Maelstrom was outdated and didn’t accurately represent Norway‘s rich history and culture, but did Frozen really belong in World Showcase?

Frozen Ever After opened about a month ago to very long wait times- up to four hours- that were only made worse by frequent temporary closures due to mechanical failures. To exacerbate things even more, the ride has very low capacity.

Why is the capacity so low? Because Disney basically reused the Maelstrom attraction while changing the scenes. The same boats that were barely full for Maelstrom are now overloaded for this new attraction.

Even still, the queue is rethemed to look like the village town of Arendale with references to familiar places from the movie including Oaken’s Tokens. Regarding the ride itself, the animatronics are great! They use the same technology as the Seven Dwarfs Mine Train to project the faces making the characters look very realistic.

As I mentioned, the ride path itself is pretty much the same. The “back, back over the falls” section is still there but occurs when Elsa sings Let It Go. I have to admit, I though this section would be gone since the ride is more themed to young children who might find it scary. The scary factor of the trolls and such are gone though, so I guess it’s not too bad.

Fortunately, when you get to the character meet and greet section after the ride is completed, the lines are about 10-15 minutes even in the afternoon.

Would the Frozen Ever After attraction be a better fit for the Magic Kingdom or Disney’s Hollywood Studios? Perhaps. Fitting everything, from attractions to landscaping, into the overall story of each park is critical for Disney.

That said, Walt also knew that – while he needed to innovate – he also needed to give people what they wanted.

Based on the huge lines for all things Frozen, it seems that the people have spoken and they are voting for Frozen!  Personally, I consider this an upgrade and a good business decision, even if it may not be a perfect fit by location.

Do you think the Frozen Ever After attraction belongs in Epcot?