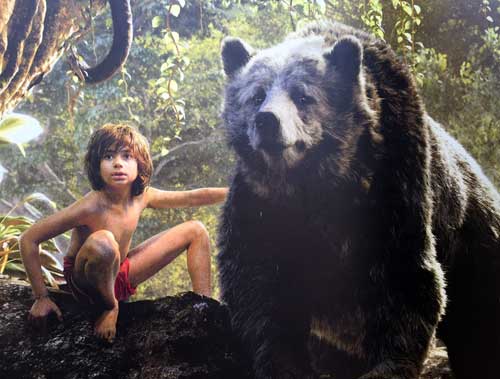 Top Three Reasons Disney’s ‘The Jungle Book’ Movie Is A Must See!

On the opening weekend for Disney’s Live action film “The Jungle Book” I went to see it and see if was worth all the hype.

Here are just a few reasons you should take your family to see this film!

What impressed me the most was the actors with the combination of CGI animal work throughout the film.  The most impressive being King Louie, the King of the Monkeys, played by Christopher Walken. The CGI is not overwhelming but is used to create a beautiful and dreamlike setting for the characters that are in a way very lifelike.

The effect is what I would imagine after viewing the animated version. The animals were very well done. At some points I personally forgot they were CGI animals.

The cast was chosen perfectly and their familiar voices do not distract from the story of the film. Cast members include Ben Kingsley as the Black Panther Bagheera, Bill Murray as Baloo the bear, Scarlett Johansson as Kaa the Snake, Lupita Nyong’o as Raksha and Idris Elba as Shere Khan the Bengal Tiger.

The cast did an amazing job bringing these classic characters to life in a familiar yet unique way.

For example, Johannson as Kaaa threw me off for a split second as i was used to hearing a male voice for this part but it made Kaa’s role even more eerie as Kaa hypnotized Mowgli. Murray as Baloo was a match made in heaven. Phil Harris, who voiced Baloo in the animated version, would of been proud of Murray’s portrayal of the laidback bear.

Newcomer Neel Sethi who plays the main character of Mowgli does an excellent job of bringing the man cub to life. He develops the character thoroughly throughout the film and his role is serious, therefore he can be taken seriously as an actor and character. You can be sure to keep an eye out for this young man in future films.

What I liked about the film is how it incorporated elements of Kipling’s book rather than focusing only on the original Disney animated movie. The film added a stripped down version of “Law of the Jungle” from the book. There are even nods to Burrough’s Tarzan stories which I noticed immediately from the trees and through Mowgli’s viewpoint in the story.

As we begin to talk about the story, it is a serious film but not in the way you think.

The characters of the story take things seriously.  You see a sense of politics in the food chain of the living animals. For example, the animals call upon a “water truce” when the dry season comes. This meant that all the animals go to a watering hole and they peacefully drink water. No harm comes to any animals and there is unity. The balance between humanity and the environment is established. They show Mowgli’s skills in the jungle as a human through his thinking process and ability to create and use tools to help animals.

They touch upon “the Red flower” as well in the film (aka fire).

It also shows in the film that Humans are not the destruction of nature but humans and animals can live in harmony together.

Have you seen Disney’s The Jungle Book movie?  What did you think?