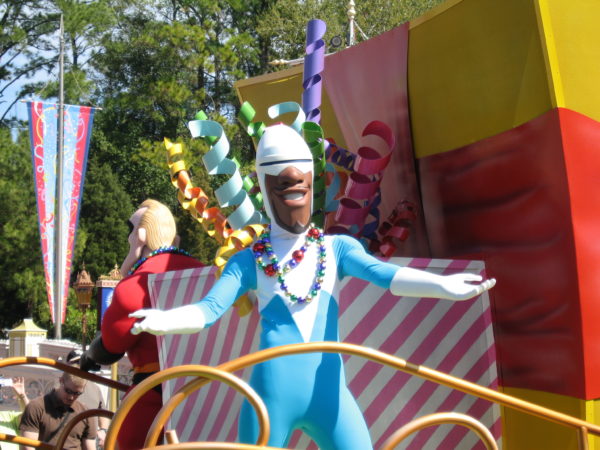 Lucius Best (Frozone) from the Incredibles in the Street Party

Disney Research: Are Secret Stuntronics The Future of Animatronics?

What’s your favorite superhero movie? Do you love sci-fi? Is The Incredibles your new favorite flik? Maybe the Marvel comics characters really tickle your fancy.

Disney is one step closer to make that dream a reality.

Disney Imagineers are working on a super secret project that they’re calling “Stuntronics”. These robots are so much more than “animatronic”; as the name suggests, they can do stunts and stick the landing every time!

Why is this important? Well, Disney Imagineers were, as I imagine it, sitting around a table one day eating corn dog nuggets and drinking Coca-Cola (disclaimer: this probably isn’t true), trying to come up with their next big project. As they looked at their current characters and where their movies are headed (this part is true), they realized that there is somewhat of a disconnect between what they’re characters can do on the big screen and what they are actually capable of when they’re right in front of you in the parks.

While the Imagineers’ current audio-animatronic technology is pretty awesome (just check out how life-like the Shaman of Songs looks in Pandora’s Na’vi River Journey in Disney’s Animal Kingdom), they can’t quite live up to the superhero lifestyle with high-flying acrobatics and effortless form of the characters in the movies.

LIGHT BULB! (I know that’s not from a Disney movie, but it works, so just go with it.) “Let’s create stunt robots!”

They did, and thanks to a very sophisticated system of “accelerometer and gyroscope arrays”, the robots can spin precisely (and believably), determine the distance to a target, and land on their mark just like any good superhero worth his (or her) weight should be able to do. They can even self-correct if something goes awry.

Now, your favorite characters just might be able to perform very realistic stunts just as you’d imagined but like you never thought possible. It’s important to mention that Imagineers create things all the time that never make it beyond their awesome labs, but these things have made it to the testing phase, and they actually work. That said, it could still be years, if ever, before they make it into the parks.