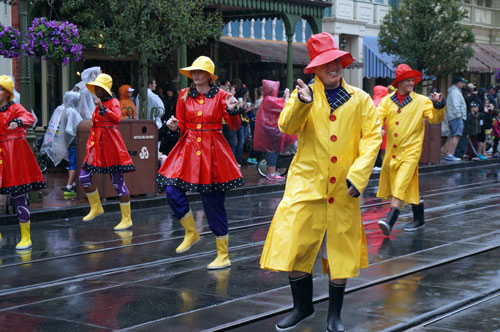 When It Rains On Your Parade: Disney’s Rainy Day Cavalcade

They say that a bad day of fishing is better than a good day at work.

In the same way, a rainy day in Disney is better than a sunny day at work!

Have you ever wondered – what happens when it rains in Disney World?

There are some things that can’t happen when it’s raining in Disney. Most outdoor attractions have to be shut down if there is lightning in the area, and attractions like Test Track in Epcot‘s Future World has to shut down even if it’s just raining because the track is exposed to the elements.

The Festival of Fantasy parade also can’t run if it’s raining mainly because the characters don’t like to get wet. Who can blame them? The floats also shouldn’t get wet. But Disney isn’t going to leave you high and… dry. (Pun intended.)

When It Rains On Your Parade

Disney has a rainy day parade called Magic Kingdom Rainy Day Cavalcade (just to be fancy, Disney used the word “cavalcade” – which is just another word for a parade).

The park will announce that the Festival of Fantasy parade has been cancelled today due to the weather. Then, the Rainy Day Cavalcade will jovially enter Main Street USA at the delight of the crowd waiting for the 3PM parade. Dancers are dressed in red and yellow Disney-themed raincoats and rubber rain boots while the characters ride on covered ride vehicles.

It’s not quite as long or as lively as the Festival of Fantasy Parade, but you’ll still get to see some of your favorite characters including Mickey Mouse, Minnie Mouse, Donald Duck, Daisy Duck, Pluto, Goofy, and maybe even the Seven Dwarfs. Some of the Disney princesses including Belle, Merida, Snow White, Alice, and more may make an appearance too.

Sure, no one wants it to rain during their Disney vacation, and you certainly don’t want to miss the Festival of Fantasy parade. However, not everyone gets the chance to see Magic Kingdom’s Rainy Day Cavalcade. You just might get to see something kind of exclusive!

Have you ever seen Magic Kingdom’s Rainy Day Cavalcade?