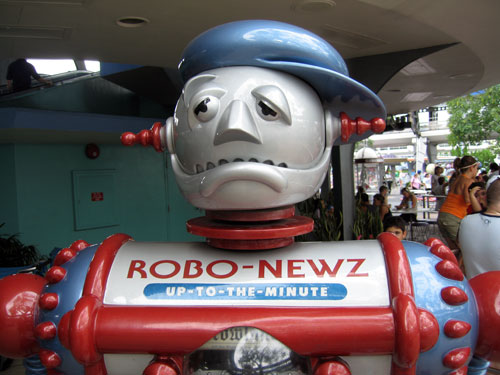 The Walt Disney Company has always been an innovator when it comes to technology.

It started early in company history when Walt Disney first used the multi-plane camera to create a sense of depth in the groundbreaking 1937 film “Snow White.”

The tradition continues today. In 2014, Disney filed nearly 250 patent applications covering a huge range of topics from “Flying roller coaster with vertical load and launch” to “Camera with plenoptic lens.”

(Ok, I had to look up the word plenoptic – it refers to a type of camera that uses an array of lenses to capture light, so the image can effectively be re-focused after the image is taken instead of only when the image is taken.)

Many of the innovations that Disney creates come from computer-based technology.

To CTO or Not CTO

Just as companies have a CFO, or Chief Financial Officer:  the top dog who watches the money, or a COO, Chief Operating Officer who is responsible for the operations of the company, most companies have a CTO, or a Chief Technology Officer.

The job of a CTO is huge. From picking the direction of technology choices to managing multi-million dollar projects, CTOs are busy people.

Interestingly, Disney doesn’t have an overall CTO. However, it does have someone who pushes technological innovation just like the company’s founder.

Bob Iger, the Chief Executive and top dude at Disney.

When Iger first went after the top job at Disney, he tried to sell the Board of Directors on his vision for the company that was based on investing in content, expanding internationally, and innovating with technology.

Iger seems to be delivering on all three parts of his vision. Disney has amazing content from “Star Wars” to “Frozen.” Disney is going gangbusters globally and will soon open a theme park in Shanghai costing more than $4 billion. Plus, Iger has reinvented Disney as a technology leader.

Iger started to push the importance of technology early in his tenure as the top manager at Disney. Back in 2005, he cut a deal to put episodes of Disney’s “Lost” and “Desperate Housewives” shows on the then-young iTunes. Also, love it or hate it, Iger has watched over the development and deployment of the $1 billion project to roll out FastPass+. Even if you aren’t a fan of that Disney system, you have to admit that it is an amazing technological achievement including everything from RFID chips to mobile phone sites, from attraction capacity planning calculations to roaming Disney Cast Members with special iPads.

In fact, Iger purposefully designed the Disney management structure so that there would not be a single CTO. Instead, each division (such as television networks, feature films, or parks and resorts) has its own technology leader.

Iger expects all Disney managers to think like technology leaders.

Based on this unique and important decision, it seems that Iger believes that media companies like Disney need to think and act like technology companies. In fact, Twitter co-founder, Jack Dorsey, and Facebook COO, Sheryl Sandberg sit on Disney’s top managing body, their Board of Directors.

Do you see Disney as a technology leader?