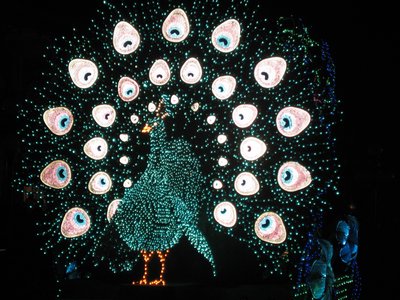 Everything has a beginning, and normally a good story about how it came about.  Disney’s classic nighttime parade, the Main Street Electrical Parade, is no different.   It has a very interesting story of how it came into being.

Over on the web site WDW News Today, Chuck Mirarchi has written a very detailed article with plenty of great information and little-known facts about the history of the parade.

In the late 1960s and the early 1970s much of the energy, focus, and money that the Disney Company had to spend was focused on the Florida Project – Walt Disney World. Card Walker, who was the President of the company at that time, wanted to focus some energy on Disneyland.  Card wanted an attraction that would cause people to stay until closing so they would continue to spend their money on dinners, souvenirs, etc.

Ron Miziker, one of the original creators of the Main Street Electrical parade, set out to do some research on how he could come up with something to please his bosses.  He headed to his library and researched some ideas.  He read how, in the early 1900s, cities that first installed electricity held parades beneath strings of light bulbs.  And thus the idea of a nighttime parade was born.

The development team borrowed heavily from the Electrical Water Pageant. Disney developed the Electrical Water Pageant for the opening of Walt Disney World in 1971. If you haven’t seen it, the Pageant involves a number of barges, linked together like a train, and pulled by a boat on the Seven Seas Lagoon in front of the Magic Kingdom. Each barge contains a large flat screen with light that makes animated images.

I have heard that the Electrical Water Pageant was originally intended just for the park’s grand opening, but it is still going strong decades later.

The first version of the Main Street Electrical parade included mostly flat screens and just a few floats. But even though the parade borrowed from the Pageant, it was still a major new technical development effort. You see, a boat the middle of a lake can carry a noisy generator. Parade units going down the street just feet from park guests needs an entirely different technology.

One of the first issues the designers needed to solve was how to power the floats.  Disney had just purchased some NiCad batteries – at the time a very new technology.  They figured out that these batteries could more efficiently provide power when compared to the alternative – traditional car batteries.

The team also needed appropriate lights for the floats.  In Chicago they found the Silvestri company as the single company manufacturing small Christmas lights.

With power and lights solved, they just needed to build the floats.  But that too was a major undertaking.

Originally Disney hired a Silvestri to build the floats.  It didn’t go well.  The  company was making little progress and time was growing short to the management-imposed summer deadline to launch the new parade.  Ron gave orders for all the partially-completed floats to be shipped from Chicago to California where the production team set up huge tents to work on completing the construction.

Disney also developed triggers in each zone of the parade route so that guests would hear music that was specific to each float.

All these things were extremely cutting edge for the time.

Not Looking So Bright

The teams scheduled rehearsals, but only two of them took place – and they didn’t go well.  Floats fell apart.  Horses (yes, they had horses) couldn’t carry the weights.  It wasn’t looking good.

Crews worked on the floats right up to the literal minute the parade premiered in June of 1972.

Chuck writes, “As the floats were readying to move from backstage to Main Street [for the first debut of the parade to the public], the lights on the units were lighted for the first time! Dozens of electricians were still working on the lights and hopping off just before each unit went through the gates into public view.”

In 1977 Disney made significant changes to the parade, removing the flat screens and introducing only three-dimensional float units.  The parade has traveled cross-country several times, but even after all these years remains a crowd favorite.

And it keeps guests in the park until closing.