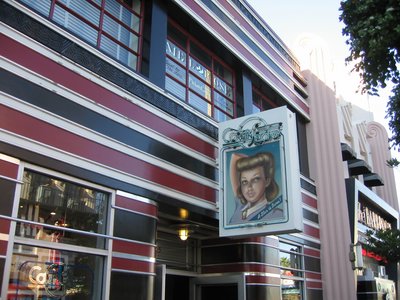 Since its opening in 1989, Disney’s Hollywood Studios (formerly Disney/MGM Studios) has captivated guests with its portrayal of the glorified Hollywood of the 1930’s.

As Michael Eisner stated in his dedication of the park, “we welcome you to a Hollywood that never was- and always will be.” These words never sounded truer.

Walking down Hollywood Blvd. with its streetmosphere characters and faux productions taking place offer guests the illusion that this is how California operated in the 19030’s, and as guests we accept and embrace this park as an example of what we missed years before our time.

The Story Behind The Park

Looking back at its creation, from concept to its opening as a working theme park and production studio, there is evidence that it was not just the creation from one man, but a slew of Imagineers and executives.  The park presents the Hollywood that we all “thought” existed.

It has been widely accepted that the original concept for the Disney MGM Studios was attributed to Michael Eisner, from his background at Paramount and his relationships with many Hollywood stars, directors and producers.  However, the simple truth is that the idea of dealing with movies and Hollywood had been kicking around Imagineering since the construction of Epcot and the brainchild of Marty Sklar.

During the design of the Epcot theme park, there were pavilions conceptualized and created with different themes in mind. These themes included land, space, water, health, communication and imagination. One theme that was scraped after long debate and discussion was the history of film.

This pavilion would have the look of a soundstage, and would put guests into the middle of some of the most famous scenes in film history. (Sound familiar?) Its placement would have put it between the Land Pavilion and the Imagination Pavilion, the idea was shelved for other concepts that fit the Epcot theme of the future and ground elements.

When Michael Eisner and Frank Wells took over the Disney Company in 1984, the plan was to look over all the things that Imagineering was doing, and what they were not doing. When Eisner came across the concepts for the Movie pavilion, he quickly saw it as an instant success. His only issue was its placement, as in his opinion it would be better served as a centerpiece to an entirely new theme park, rather than an add on to an existing park.

The stage was set, both literally and figuratively for a park creation that broke the rules that were set by Walt Disney himself.

One of the motivations for the Disney/MGM Studios creation was the rumor that Universal had planned on building on newly owned property, and that park would include a backlot tour, and a movie theme. The Disney Company saw an opportunity to jump while the iron was hot, as they already had ownership of land, and carte blanche on how to build, what to build (as concepts already existed) and a timeline to complete such a deal. This allowed Disney to get started immediately, and which ultimately allowed the Disney/MGM Studios to open roughly 11 months before Universal Studios welcomed guests.

One of the more overlooked pieces of the puzzle for Disney was the inclusion of Metro-Goldwyn Mayer, the film company founded in 1924. This contractual agreement gave Disney instant credibility, as it added a major film studio to the banner, as well as familiarity in 1930’s and 40’s Hollywood.

The agreement also allowed Disney access to the MGM vault, which would be vital to the creation of the park’s hallmark attraction, The Great Movie Ride. With all the pieces in place, groundbreaking was eminent, with Eisner’s goal of opening before the end of the eighties.

With Eisner’s public announcement of the project coming in mid-1985, Disney broke ground on the park in 1986. Smaller than both Epcot and Magic Kingdom, company executives anticipated the park to be a half-day attraction, one that would keep guests on property for longer periods during their trip. They were unaware just how right they were.

With a slew of film directors and producers involved with the creation of the park, like George Lucas, the park had plenty of talented minds working together. The one major question would be the park icon.

With Cinderella’s Castle and Spaceship Earth, the Disney Company continued the tradition that Walt himself started, and they wanted to continue that practice, mostly because of its success. With the theme of the park in mind, Disney chose to model their in-park “weenie” after the Mann’s Chinese Theater. Because of its relatively small footprint in California, forced perspective was not needed, as it was created with the original blueprint.

The lobby became an exact replica, and the Great Movie Ride was housed within it. Disney even created its all walk of fame, with celebrities from Michael J. Fox to Mickey Mouse leaving their handprints in the cement.

The outer park icon was the Earful Tower, modeled after the one built on the Burbank Studio lot. This was used for many early souvenirs as the official park icon.

The park opened on May 1, 1989 to instant success. The park became more than just the half-day park the company had envisioned. The popularity far exceeded expectations, so much that parts of the park originally planned to be backstage was opened to guests to help with crowd flow issues. (As guests who visit during the Osborne Spectacle of Lights can attest to.)

With a working studio accompanying the theme park, Disney had accomplished their goal of creating the Disney/MGM Studios before the end of the 1980’s and was the centerpiece for the newly appointed Disney Decade.

What do you think about this history behind the Studio’s development?