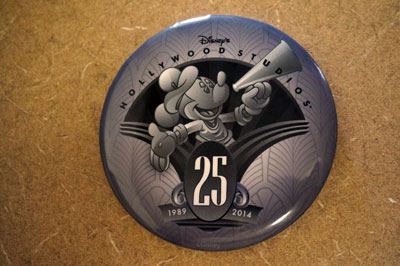 It all started back on May 1, 1989 when Disney opened the park that was formerly known as the Disney-MGM Studios.

Many things have changed over the years: the focus of the park shifted from a working movie studio to more of a theme park; the name of the park has changed from the Disney-MGM Studios to Disney’s Hollywood Studios; and Disney added and subtracted a variety of shows and attractions over the years.

However, even with all the changes, the basic premise of the park has not changed. Michael Eisner, then the CEO of the Disney Company, captured that premise very nicely in the dedication speech back in 1989: “We welcome you to a Hollywood that never was and always will be.”

To celebrate the 25th Anniversary of the timeless version of Hollywood and Disney’s park that celebrates it, Disney offered some special events on May 1, 2014.

Let’s look at what Disney made available:

Disney offered guests a free anniversary button as well as an anniversary edition of the Guide Map.

The anniversary edition of the Guide Map included not only a map of the current park but also a map of how the park looked back when it first opened. There sure was a lot less to see and do back then! The Guide Map also included a summary of the additions to the park over time.

I’m a big fan of the special cupcakes that Disney offers. Disney created a cupcake to celebrate the anniversary: a chocolate cupcake with hazelnut-chocolate (aka Nutella) butter cream.

Like most Disney cupcakes, this one was big, colorful, and sweet. Oh, yes, it was delicious too.  It was topped off with plenty of frosting and a piece of chocolate that included the 25th anniversary logo.

Special event merchandise is something that Disney loves to create and guests seem to love to buy. This event was no different. There was a long line for getting into the temporary anniversary merchandise shop, which Disney set up on Pixar Place inside the usually-empty Stage 1 between Toy Story Midway Mania and the Studio Backlot Tour. Disney offered shirts, Duffy plush bears, and Disney Trading Pins with the event logo.

Disney set up a stage near The Great Movie Ride where Disney Vice President Dan Cockerell held a short re-dedication ceremony and honored some of the Disney Cast Members who had worked at the park for the past 25 years.

Disney capped off the evening with a big fireworks display high above the Sorcerer’s Hat.

Do you like how Disney handled the 25th anniversary of Disney’s Hollywood Studios?