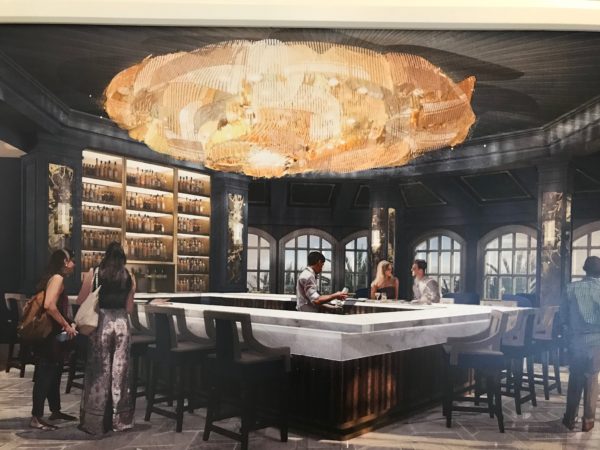 Beauty and the Beast Lounge Concept Art at Grand Floridian

Disney has been on a run lately of remaking old animated movies into live-action movies. One of the biggest hits was the live-action version of Beauty and the Beast starring Emma Watson as Belle and Dan Stevens as Beast. Disney also cashed in big on this movie with the Be Our Guest Restaurant in Magic Kingdom’s Fantasyland, which remains one of the hardest Advanced Dining Reservations to snag in all of Disney World.

Now they’re opening a Beauty and the Beast themed lounge in one of the Disney resort hotels.

Disney’s Grand Floridian Resort and Spa has closed Mizner’s Lounge and Commander Porter’s and temporarily moved Mizner’s Lounge to the first-floor lobby near The Garden View Tea Room.  Construction has begun on the new bar.

The Beauty and the Beast-themed lounge, which has not been given a name, will celebrate the magic and romance of the Beast and Belle story with four unique spaces including the signature bar, which sits beneath a massive gold chandelier inspired by Belle’s gown. The formal library is inspired by Beast’s French countryside castle, and the Garden Room is inspired by the enchanted forest surrounding Beast’s Castle. There will also be an outdoor patio reminiscent of Beast’s garden terrace.

Disney has not announced an opening date for this new lounge, but stay tuned for updates!

Beauty and the Beast-themed lounge at the Grand Floridian: Good idea?