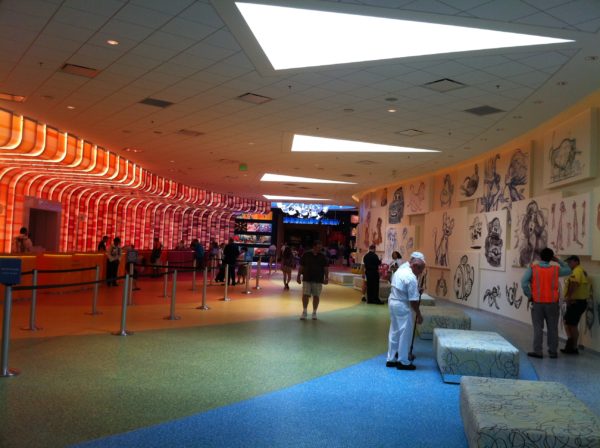 People in Animaiton Hall at Disney's Art Of Animation Resort

Disney’s Art of Animation Resort celebrates Disney’s bread and butter: animated feature films. Focus is on Disney films including The Little Mermaid and The Lion King, but there’s also a section for Pixar’s Cars movie. The entire resort models this theme, and there’s nowhere that it’s more obvious than in the hotel’s lobby, Animation Hall.

There are gigantic sketches on the walls, comfy benches, and an area for kids to watch Disney movies. There’s even a resident sketch artist appearing daily in the lobby.

But Animation Hall is about to get a makeover in the form of a new floor! Work began on April 28th at 11 pm and is scheduled to be completed by September 7th.

During this time, the lobby will have limited access, so the Sketch Artist will move to the Resort Airline Check-in location to the back, right side of the building. Plus, guests arriving on Disney’s Magical Express will unload at the stop used for Disney’s Hollywood Studios, but departing guests will not notice any changes. Watch for Cast Members who will be roaming around both inside and outside Animation Hall to help guests navigate these changes.

A new floor isn’t the only change taking place at Art of Animation, though! This update will be completed in time for the hotel to become an official stop on the Disney Skyliner route!

Excited for the Art of Animation Resort lobby makeover?