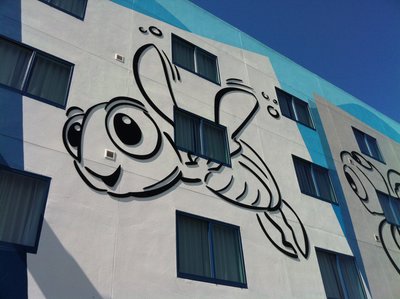 We can’t speak to the budget side of Disney’s most recent resort addition, Disney’s Art Of Animation, but we have learned that Disney has created some amazing magic in getting the hotel open earlier than originally planned.

Disney announced the first phase of the new value resort will open on May 31.  The first phase consists of the Finding Nemo section of the resort.   It will be followed by the Cars section in June, The Lion King section in August, and the fourth and final Little Mermaid section in September.

Three of  the sections (The Little Mermaid, Cars, and The Lion King) will be fully made up of family suites, including more than 1,000 rooms.  The Little Mermaid section will contain more traditional hotel rooms.

The rooms in each section are slated to take design cues from their corresponding movies.  Early designs show that the rooms in The Finding Nemo section and The Little Mermaid section will be painted aqua blue and contain carpet with a wave pattern.  The Cars rooms will include the brown, orange, and beige colors of the desert, together with automotive signs.  The Lion King rooms has a hint of jungle vegetation.  And all the rooms feature large artwork with images from the movies.