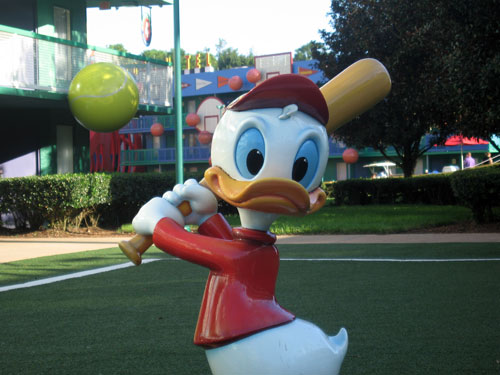 This resort was the first of three All-Star resorts to be built, opening its doors to its first guests in 1994. It was also the first Disney Value Resort to be built on the Disney World property. The design, by Miami company Architectonica, was the model for the two subsequent All-Star resorts. Outsized sporting icons bring the theme to life, from a four-story football helmet to 51-foot tall tennis rackets.

The Advent of the Value Resort

With the first Value Resort, Disney wanted to allow visitors on a tighter budget the chance to enjoy the same convenience, customer service, and fun Disney themes that draw so many guests to the more expensive resorts. For reasonable rates, All-Star guests can enjoy complimentary bus service to all areas of Disney World, take advantage of additional theme park “magic” hours, or use their hotel concierge to secure theme park passes and Disney restaurant reservations. Amenities at these value resorts are minimal, though each offers multiple pools and food court dining. They are ideal for thrifty travelers, or Disney World guests who don’t plan to spend much time at their resort and would not get their money’s worth at one of the upscale resorts. 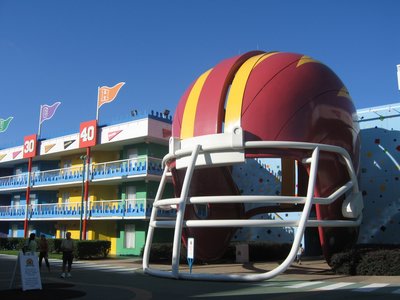 The Surfboard Bay pool and smaller kiddie pool sit directly outside Stadium Hall, surrounded by the two surfboard-festooned buildings of Surf’s Up! Under the Florida sun, surrounded by palm trees, taking a dip in the bright blue water will have surf lovers feeling right at home.

As you stand pool-side, heading straight ahead will take you to Hoops Hotel and Center Court, while turning to the left will lead you to Touchdown! and Homerun Hotel.

Hoops Hotel, no surprise, is dedicated to the great game of basketball. Most basketball players are very tall, but even they would be hard pressed to dunk on one of the two and a half story hoops that stand in the courtyard. Or to lift one of the basketballs that stand over three-feet high.

Nevertheless, the basketball player needed to dribble the balls at Hoops Hotel is tiny compared to the giant tennis player needed to lift the rackets at Center Court. If you look out from your Center Court balcony, you can also see Donald Duck playing a game in the courtyard, which has been decorated like a grass tennis court.

Homerun Hotel has giant baseball bats and scoreboards that give it the feel of an old school baseball stadium. It also has the second of the resort’s two pools, Grand Slam pool which was laid out in the shape of a baseball diamond.

Touchdown! the football themed area, may be the most impressive of all with its massive football helmets, giant Coca Cola cups, and brightly painted buildings surrounded the courtyard, which resembles a narrow football field. This field is even decorated with giant Xs and Os, while poles and numbers on the buildings show the 40 yard line, 30 yard line, and so on.

Each of the All-Star resorts has an extensive food court in place of sit down restaurants. Each food court is decorated according to the resort theme, and the End Zone is covered in sporting images. The End Zone food court can seat up to 550 people, and has a variety of counters where guests can order quick service dishes.

The food court serves hot breakfast items in the morning, and typical fast food dishes for lunch and dinner such as burgers, pizza, and chicken. Pizza is available for room delivery, but no other room service exists at this resort.

You will see plenty of Disney characters around the resort.

The remaining theme parks, water parks, and Disney Springs are only accessible to All-Star guests by bus or by car. Disney transportation is one of the best reasons to choose an on-site value resort in favor of other hotels in the Orlando area, so most guests take the bus even if they have their own car. Even when lines for the bus are long during peak times of the day, avoiding the hassle of parking almost always makes buses the faster option. 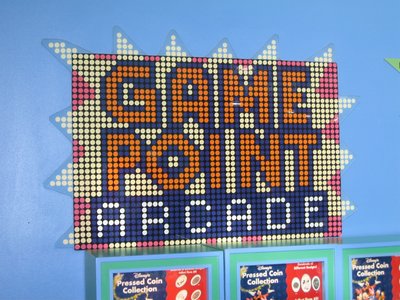 All of the All-Star resorts have their buildings relatively close together, which means that noise from the pools or from general foot traffic if you are near the main building can be disruptive if you are a late riser or go early to bed. This can be largely negated by selecting a room that is on the opposite side of the pools and main walkways, or farther from Stadium Hall. However, many guests prefer to be close to Stadium Hall to be first in line for breakfast and the buses to the rest of the Disney World resort.

The rooms at this older value resort are on the small side, and past guests say that groups of two or three will be much more comfortable than four.

One advantage of the All-Star Sports Resort is that the Disney World buses stop here before the other two All-Star resorts. In the busy morning hours, this can be a great advantage since buses may be completely full by the time they reach the All-Star Music or All-Star Movies resorts. It is also nice to be the first stop at the end of the day when you are eager to get back to your room to rest your feet.

Are you a fan of Disney’s All-Star Sports Resort?