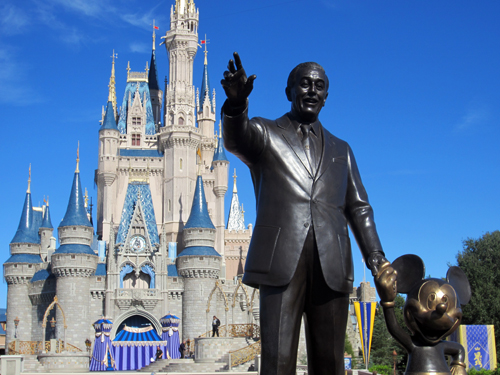 Who’s Up for A Disneyland Vacation?

Yes, this is a picture of Walt Disney World, but you could be on your way to Disneyland!

1 GRAND PRIZE: One (1) Grand Prize winner will receive a Delta Vacations® certificate valid for a three (3) day/two (2) night travel package for Grand Prize winner and up to three (3) travel companions (together with the Grand Prize winner, the “Group”) to Burbank, California which must commence on or before July 31, 2016 (the “Trip” or the “Grand Prize”). The certificate valid for the Grand Prize consists of the following elements for the Group: [a] roundtrip coach air transportation for four (4) people (winner and three (3) travel companions) between a major gateway commercial airport serviced by Delta Air Lines® nearest the Grand Prize winner’s legal residence (as selected by Sponsor) (“Airport of Origin”) to a Burbank, California area airport (as selected by Sponsor) with Grand Prize winner being responsible for any cost in excess of $1,200 per person); [b] hotel accommodations during the Trip (one standard room/quad occupancy) consisting of: two (2) nights at a Sponsor selected hotel in Burbank, California valued at up to $1,500 with Grand Prize winner being able to select more expensive accommodations by paying costs in excess of $1,500. Additionally, the Group will receive a Studio Tour (subject to availability), Animation Tutorial and a Caricature by a Disney Artist (Animation Tutorial and Caricature drawing subject to Disney Artist availability).

Special Considerations: Throughout the Sweepstakes Period, tiers of prizing will be made available based on the number of member Engagements received as set forth above (each, a “Reveal”) in accordance with the following schedule:

Entrants are not required to engage as set forth above, however engaging will unlock more prizing tiers. For each Engagement threshold met as set forth in the chart above (as measured by Sponsor in its sole and absolute discretion), the next Reveal prize, described in Section 10 of these Official Rules, will become available to be won in the Sweepstakes. Please note: Sweepstakes entries will NOT be on any of the social media channels. The social media channels will only apply to determining the number of Engagements. A total of 5 Reveals are available to be unlocked during the Sweepstakes Period. If an Engagement threshold is not met, then the Reveal prizes for that threshold and higher thresholds will remain locked and will not be made available in the Sweepstakes.

Open To: Legal residents of one of the 50 United States, the District of Columbia, Puerto Rico, or Canada (excluding Quebec), (b) 13 years of age or older, and (c) members of Disney Movie Rewards Loyalty Program (“DMR”).(Sorry to the folks outside the USA, we don’t run this contest, we just report on it).

Wouldn’t a trip to Disneyland be nice?
Leave your comments below.