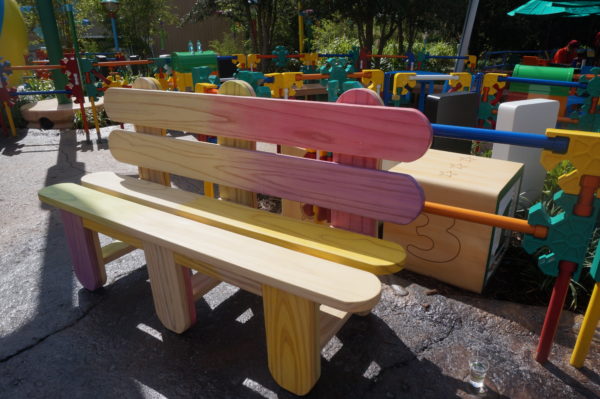 Disneyland has long had issues with traffic jams and congested walkways. In fact, Disneyland’s opening day saw 28,000 people, more than twice what they expected, even though the park was not early ready for any visitors, let alone this many!

Now, 63 years after the park opened, Disneyland is still dealing with walkways that are entirely too small for the average 50,000 visitors per day. There are bottlenecks, traffic jams, and frustrated guests.

Disney is always trying to make the guest experience better, so they have a solution! The solution is to remove chairs and benches from walking rounds and widen the walkways. They will, in turn, add more seating to restaurants in the parks – more than doubling the amount of some restaurant seating.

So is Disney World next? They’ve already said they’re working to remove the unnecessary use of straws and other disposables; will they be removing “free” seating next?

The short answer is probably not.

Disneyland is a mere 85 acres where as Magic Kingdom alone is 107 acres and is the smallest park in Disney World and welcomes the most guests in a day averaging 53,000 per day.

When Walt built Disneyland, he was largely unprepared for what was to come. Ten years later, he and his team learned from their previous experiences and made things better the second time around including larger walkways and queues.

Disney’s Hollywood Studios is the second smallest park at 135 acres, and they have, historically, welcomed fewer crowds. While crowds soared this summer when Toy Story Land opened, there was still plenty of space in the rest of the park to accommodate guests, and more guests will flock to Star Wars: Galaxy’s Edge next fall when this new land opens.

Epcot measures 300 acres between Future World and World Showcase, and Disney’s Animal Kingdom ranks the largest at 580 acres. While a large amount of Animal Kingdom is used for animal and attraction space, there’s still plenty of room for guests.

Sure, Disney World gets busy and there can be bottlenecks, but Disney’s recent work in Magic Kingdom and Hollywood Studios have show innovative ways to add seating like the space outside of the new restroom area in New Fantasyland, which combines seating with charging stations.

The takeaway here is that Disney World has a lot more space that Disneyland and room to expand. It is possible, though, that they could make a business decision to remove “free” bench seating in the parks and add seating in the restaurants that will be reserved for those who make food purchases.