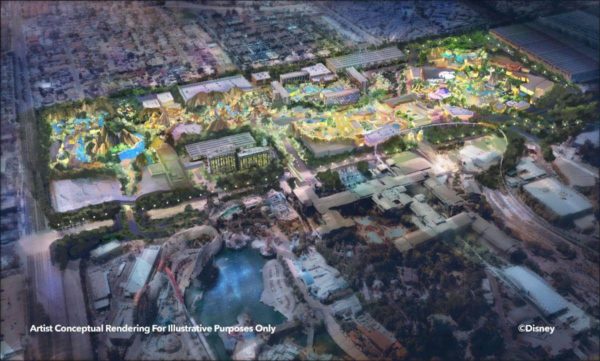 Disneyland has announced long-term plans to add to its California theme parks, as well as additional retail and parking in Anaheim.  This is part of the company’s work to plan for the next several decades.

Some sources have interpreted this as adding a third theme park, but Disney has called it a “theme park expansion.”

Called DisneylandForward, the plan is how Disney plans to work with local officials while coming out of the COVID-19 pandemic.  Anaheim city leaders will need to approve the company’s plans – a negotiation process that may take two years.

Disney will ask the city of Anaheim for changes to the plans approved in the 1990s so that it can expand.

Concept art includes a mountain surrounded by water, with new buildings to the south.  A mountain ridge will shield neighbors to west the from the theme park.

Disney said that the plans provide a general idea of what they might include in the expansion, including importing attractions from other parks and building on popular Disney themes: Tangled, Frozen, and Peter Pan themed lands coming to Tokyo Disneyland in Japan, the Zootopia themed land, Disneytown retail district and the Tron roller coaster at Shanghai Disneyland in China and Toy Story Land and Disney Springs shopping district at Walt Disney World in Florida.

The new plans will not include a physical expansion or purchasing additional land.

Excited to hear Disneyland will expand?