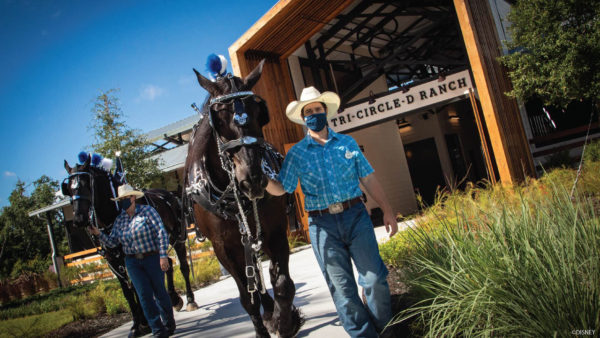 Disney has announced that they have completed a new barn at Tri-Circle-D Ranch.  The barn is located near Fort Wilderness as is know as the home to the “The Happiest Horses on Earth.”

Walt himself wanted to make sure that Disney World’s Magic Kingdom would have working horses, just as Disneyland did.

The new barn includes space pony rides, and the new stable provides larger stalls for the horses.  It also adds ten new stalls, and is about twice the size of the original facility.

For the opening of Disneyland, Walt purchased a Dragon Calliope that was built in 1907.  The piece of Disney history was moved to Walt Disney World in 1981 and now will be on display at Disney’s Fort Wilderness Resort & Campground.

Let’s take a look at this beautiful new facility:

Glad to see that Disney’s horses have a new home at the Tri-Circle D Ranch?