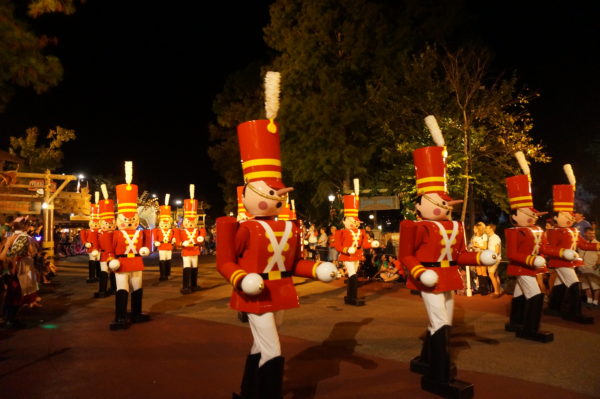 Dancing Toy Soldiers in in Mickey's Once Upon A Christmastime Parade

Disney World’s First Christmas: What Was It Like in 1971?

Disney World opened in 1971 with one theme park, Magic Kingdom, and two hotels- Disney’s Contemporary Resort and Disney’s Polynesian Resort. All 1,500 rooms were booked for the next year, and Magic Kingdom was welcoming more and more guests every day.

Admission was $4.75 for adults, which included seven ride tickets and transportation (a $7.65 value).

Hours around the holiday were extended from 9am to midnight, and the park was open on Christmas Eve from 9am-6pm and Christmas Day 10am-6pm.  After all, Disney wanted to give its Cast members the opportunity to spend some time with their families, too.

Magic Kingdom was decorated from top to bottom. As soon as you entered Town Square, you would see a 50-foot-tall Christmas tree, harvested from Paradise, Michigan, covered in 1200 lights and 1000 ornaments.

Each window on Main Street USA was lit, and there were hundreds of wreaths and thousands of flowers – poinsettias, snapdragons, and pansies.

Magic Kingdom began their holiday parade on December 20th. It ran every day until January 2nd and was complete with marching toy soldiers, dancing reindeer, school marching bands, and 50 of Disney’s famous characters.

Santa Claus joined the parade and also appeared in the park.

The Candlelight Processional is a staple of Christmastime today in Disney World, but did you know it started more than 50 years ago? Even in Disney’s early days, they incorporated the retelling of the Christmas story into the parks.

In fact, the Candlelight Processional dates back to 1958 in Disneyland when singers from USC and local choirs joined by school bands performed in Town Square with a celebrity narrator who performed a dramatic reading of the Christmas story. Dennis Morgan, an American actor and singer, held this position from 1961 to 1964, and Dick Van Dyke took on the honor in 1965 to promote Mary Poppins.

When Magic Kingdom opened in 1971, the Candlelight Processional was added to the holiday celebrations. Like in Disneyland, the show was performed in front of the Walt Disney World Railroad Main Street USA Station. The show took place on two nights, December 18th and 19th, at 6pm with 1200 carolers and Rock Hudson, another American actor, performing the narration both nights. Frederick Fennell conducted the orchestra and boys’ choirs made up the Christmas tree.

The Candlelight Processional was moved to Epcot in 1993 after guests expressed that they wanted more shows. The America Gardens Theater in The American Adventure Pavilion, was capable of holding larger audiences and being a dedicated location for such a performance. There were 30 performances that year spanning 15 nights, and the show was expanded even more in 1994 with 60 performances across 30 nights. This year, 108 performances were scheduled across 36 nights.

Some Disney World traditions start small, but they sure do grow over time!

Have you ever celebrated Christmas in Disney World?