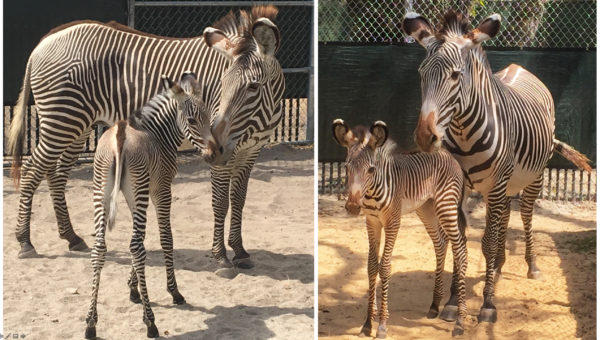 DisneyÕs Animal Kingdom announces the birth of two female GrevyÕs zebras Thurs., May 3, 2018. Currently, the foals are nursing and bonding with their moms backstage before joining the herd in the Gorilla Falls Exploration Trail overlook. Originating from Africa, GrevyÕs zebras are the most endangered species of zebra, with approximately 2,500 in the world. Visit DisneyAnimals.com to learn more about zebras and other animals at Walt Disney World Resort. (Disney)

Disney’s Animal Kingdom is much more than just a theme park; it’s known for its conservation – efforts especially in helping endangered species.

On Thursday, May 3rd, two female Grevy’s Zebras, the most endangered species of all zebras, were born in Animal Kingdom, which is a really big deal!

Just a few decades ago, 15,000 Grevy’s Zebras roamed freely in Somalia, Ethiopia, Eritrea, Dijoubi, and Kenya, but now they have been confined to Southern Ethiopia and Northern Kenya, and there are few more than 2,000 left in the entire world in the wild and in captivity. This equates to the most substantial reductions of range of any African mammal. The American Wildlife Federation says they have suffered more than a 50% population decline in just three decades.

The Grevy’s Zebra is a very unique zebra. The AWF says they are the largest wild animal in the horse family, and they can be distinguished from other zebras for their height, larger ears, and narrow stripes, which are as unique as human fingerprints. The new babies in Disney’s Animal Kingdom have reddish-brown stripes, but they were turn black as they mature. Interestingly, their peak birth period is typically between July and August, after 13 months gestation, but these babies were born a little earlier than that.

The babies are typically able to stand after just six minutes and run within 40 minutes, which is good because they have some really fast natural predators like lions, hyenas, leopards, and cheetahs. Their most dangerous predator, however, is humans and hunting dogs. Humans not only hunt them for their beautiful skins, food, and medicinal use, but we have significantly invaded their habitats leading to habitat loss and competition of resources with other zebras and other species.

Grevy’s Zebras are loosely social with virtually no dominance in a herd, but there are very stable relationships between a mother and her foals.

The new zebra babies will be kept backstage to allow for natural nursing and bonding with their mother then they will join the herd in the Gorilla Falls Exploration trail later this year.

While these babies will never ever see the wild, their birth adds two more to the count, and while that might not seem like a lot, it is a step in the right direction!

Will you go see the baby zebras at Animal Kingdom?