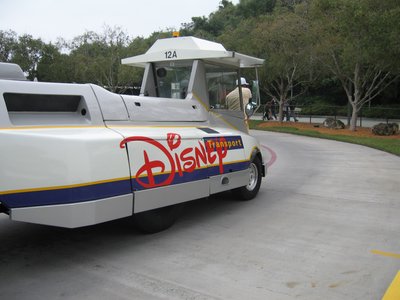 The theme parks of Orlando, Florida are not like those in other areas of the country. The primary difference is size: they are vast. Navigating a group through the intricacies of a park is one hurdle to be surmounted in itself. It’s quite another thing just to get a group to and from these destinations without losing one’s grip on sanity! In this article, we present a short guide to the Disney World transportation options available in the area.

The Auto Route And Orlando Highways

American’s favorite mode of transportation is still the personal automobile. We have an ongoing love affair with these indispensable vehicles. The Disney World parks are set up to accommodate us in this respect; for an extra parking fee, of course. Parking is plentiful as long as guests are willing to brave the parking lots themselves. There are a few things to know about Florida freeways and traffic patterns before taking on the job of navigator.

First, like the 5 south in California, which travels northwest for several miles, Florida’s I-4 has an east direction and a west direction; nonetheless it actually heads north east and south west when it hits the Kissimmee-Orlando area. From I-4, the most common freeway taken to reach the Disney parks is US 192 and its World Drive exit. An alternative is FL 429, a newer highway with tolls that runs to the west of Disney’s property.  FL 429 takes you to the Walt Disney Interchange/Harzog Road which is also known as the beltway.

I-4 is free and popular, but it is also a highway that visitors would do well to avoid during peak hours. It can become extremely bottlenecked around International Drive and other downtown Orlando exits, both because of the masses of tourists clogging the roadways, the ongoing construction that it takes to support roadways that are so continually assailed, and all the locals just trying to start or end their day in the downtown Orlando office buildings.

Airports in the area are of course inundated as well. Orlando International can get very busy at most times of the year, but especially surrounding the times of highest guest concentration such as spring break, Christmas, and summer. To put it into perspective, the airport pats down thirty-four million passengers per year. That’s over ninety-three thousand a day! Some people opt, therefore, for the less stressful but further removed Sanford International airport.  Sanford entails something of a longer drive to get to Disney but is much less taxing overall.  However, Sanford airport is much smaller and has far fewer flight options.

Leave the Driving to Someone

Having made it through the ringer of the airport, it’s nice not to have to take the reins of a vehicle and drive in unfamiliar territory over confusing and crowded highways. Taxis from Orlando International are plentiful and can carry up to eight passengers. Those staying at a Disney Resort Hotel will pay about sixty bucks for a one-way fare. Those staying at independent hotels in the path of US 192 should budget about fifty-five, and those resting their heads on pillows along International Drive around forty. Shuttles are also a very good option for the budget-minded who don’t mind waiting a little longer for the vehicle to fill up with passengers and make multiple stops along the way.

With a travel package including airport transfers, guests get a free ride aboard Mears Transportation Group’s shuttles. People can also pay to ride the shuttles; prices range from about nineteen to twenty-seven dollars for kids and twenty-four to forty-six for grownups.

A Luxury Ride Of Your Own

An option that is a few steps up on both the classiness and expense scales is a town car. Well-maintained Crown Victorias can be retained for about a hundred bucks round trip (a trip to the hotel and a later return trip to the airport) or about sixty for one-way, depending of course on the company offering the service. In this industry, the drivers depend on tips, so one is pretty much expected at the end of each ride. An even classier option for those with budget to burn is a limousine. Limos can be secured for under two hundred fifty dollars round trip or between a hundred and a hundred and thirty one-way (excluding tip).

For the truly adventurous, rental cars are always an option, too. Rentals can even be delivered to the hotel where a guest is staying—no need to wait in line at the airport with all the other tired, exasperated travelers! Reserving ahead online is usually a great way to go. Of course, driving to the Disney parks means that you might need to work through traffic on your way to Walt’s World.

A general recommendation to visitors is that if they plan to keep most of their entertainment and eating in or in the near vicinity of Disney World and its hotels, there’s simply no need to rent a car at all. Rental cars are most useful to people who want to leave the parks midday in favor of the recreation offered by their lodgings or to catch up on their sleep, or people who really want to get away from it all in the evening and enjoy a dinner theater, bar or restaurant ‘off-campus’. If this is the case, Avis and Alamo perform very well in customer polls.

Do You Believe in Magic?

Disney offers a shuttle service that connects Orlando’s main airport and the majority of Walt Disney World Resort Hotels. This service, Disney’s Magical Express, comes with its own unique identifier tags that guests put on their bags and belongings to identify them to the operators of the service and a document booklet (Disney speak for “folder with coupons in it”) that guests present at the welcome center after enjoying their first Disney line of the trip.

There, transportation vouchers will be validated and groups are whisked off to wait in another line for a bus. Some who have been through this report that guests with destinations among the most expensive of the resorts get noticeably better (i.e. quicker) service. From there it’s a short hour or two before guests are deposited at their destinations throughout the Disney Hotels.

Notably, the Swan, Dolphin and other non-Disney-owned hotels that are nonetheless part of the Disney resort complex are not eligible for the Magic Express.

A big advantage of Disney’s Magical Express is that you can plan ahead with Disney to get luggage tags.  Put the tags on your bags, check them at your home airport, and you don’t have to deal with them until they show up in your hotel room.  This is a very cool feature.  And the best thing about Disney’s Magical Express is that it is free.  In exchange, you lose the easy freedom to leave Disney property, but if that was your plan anyway then definitely check it out.