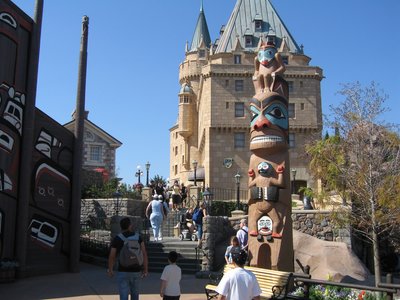 These simple totems owed more to popular Wild West iconography from film and television than to any Native American tradition, and joined others of Disney’s early not-necessarily-so-culturally-sensitive endeavors.

However, rather than disappearing from Walt Disney World in a more politically correct day and age, totem poles that attempt to accurately reflect Native American art and storytelling have arisen elsewhere around Disney World. A totem pole now features prominently at Canada Pavilion in Epcot’s World Showcase, and two even larger totem poles decorate the Wilderness Lodge deluxe resort.

The Meaning Of Totem Poles

Authentic Native American totems are much more than decorative pieces. While certainly beautiful, they are intended to commemorate exceptional events or people, or even to tell a story through the progression of carvings. After its initial haphazard attempts at totem pole creation for Frontierland and later with two fiberglass totems for Canada Pavilion, Disney set about creating a totem worthy of the art form’s history.

The Commissioning Of A Totem Artist

In order to create the totem pole, Disney commissioned artist David Boxley, a renowned totem pole carver from the Tsimshian tribe of Alaska. Boxley has helped to spur a revival of Tsimshian culture, and has created carvings for clients as diverse as Microsoft and the Emperor of Japan. His 30-foot tall totem pole for Canada Pavilion was erected in 1998.

What is now a fixed installation at the pavilion actually began as a kind of performance art. During the carving process, Boxley was installed on location in Canada Pavilion as he worked, where he could interact with guests and allow them to share in the process as well as the finished product.

The new totem differed from its predecessors in several important ways. Certainly, the fact that the piece was created by a Tsimshian artist lends authenticity to the work. However, the totem pole also stands out because it was carved from cedar as traditional totem poles were, and also because it tells a traditional story from Pacific Northwest Indian folklore.

Native American Indian tribes lived throughout the region from Oregon up to Alaska, and as far east as Idaho. The story told by Boxley’s totem features a popular character from Native American folklore – Raven the Trickster.

In this tale, Raven comes to Earth to find all the people of the world living in darkness. There were no stars, no moon, and no sun to shine light on the world. Raven knew that the great Sky Chief kept a bright ball of light hidden in a box, and he schemed to steal that light in order to provide people with light.

Raven had magical powers, and he used his powers to transform himself into a single pine needle. In his pine needle form he floats down the river until he is swallowed by Sky Chief’s daughter, who was taking a drink from the stream. Inside her belly, he transforms into a baby, and the daughter gives birth to him. Sky Chief is delighted to have a grandson, and shows him the light that he keeps inside the box.

As soon as Sky Chief reveals the ball of light, Raven transforms back into bird form, grabs the light, and flies away with it. He tosses the light into the sky, where it becomes the sun, moon, and stars that shed light on the world day and night.

What do you think about the totem poles at Disney World?