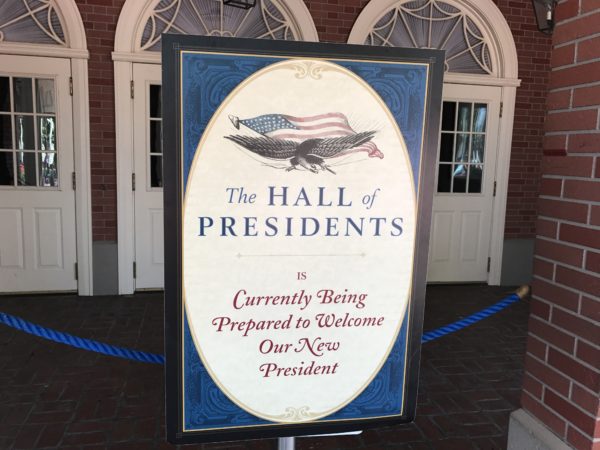 Hall of Presidents - is currently being prepared to welcome our new president. Sign from 2017.

The Hall of Presidents is now listed as “currently closed for refurbishment” on Walt Disney World’s official website. The closure is the first sign that a new President Biden animatronic is coming to the opening day attraction, a change that Disney has confirmed.

What will the Hall of Presidents look like when it reopens?

In the past, the “new” look of the attraction has been pretty standard. We expect President Trump’s animatronic to take more of a background role. The 45th President would no longer have a speaking role but would have some type of movement or action when his name is announced at the end of the show’s role call. This transition of speaking roles takes place each time a new President is added to the Hall.

Once reopened, we can expect that President Biden’s new animatronic will be added to the front row of the Presidents and will feature a small speaking role, as has each new president since Bill Clinton.

The Hall of Presidents opened in the Magic Kingdom on the park’s opening day of October 1, 1971.  Walt Disney himself loved the project, which started with the “Great Moments with Mr. Lincoln” presentation at the 1964 New York World’s Fair.

Do you take in The Hall of Presidents at the Magic Kingdom?