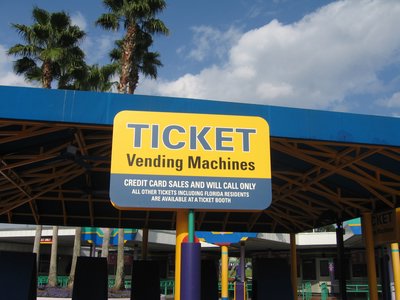 Disney World Tickets: What You Need To Know

Tickets are just one expense of visiting Disney World. But they are a big one.  Let’s take a look at what you need to know when purchasing your tickets.

Where To Buy Disney World Tickets

Disney Gate:  The most obvious place to buy Disney World tickets is right at the gate.  This is an easy choice, but it is nearly guaranteed to be the most expensive choice as well as the most time consuming choice.

Automotive Club:  If you are a member of your Automotive Club, you can purchase Disney tickets at a discount.  Not only will you save a few dollars, but you will get to skip the long line at the gate and head directly into the park.  This is a great option.

Auction Sites:  Some have had some luck buying theme park tickets from auction sites like ebay. However, it should be known that this practice does carry some element of risk. The tickets could be expired or have some other issue that would render them useless. Unlike tickets that were purchased from an authorized Disney partner, Disney World will not guarantee or honor such tickets. Still, some find that the low cost of the tickets found on such sites is worth the risk.

Used Tickets:  If you spend any time in the areas around Disney World you will see little stores that buy and sell used tickets.   Don’t use these places.  Just as you have risks in purchasing tickets from auction sites, the same risks apply here too.  Disney tickets are not transferable – they even scan your fingerprint to enforce this.  Beyond that, you have not way to tell how many days actually exist on the ticket sold at one of these locations.

Add-On Options For Base Tickets

Disney’s system of pricing tickets, generally called “Magic Your Way,” is convenient in that it covers every imaginable option. For an extra charge, ticket buyers can add three optional upgrades to their base ticket.  However, all those options can be a bit confusing.  Here is what you need to know:

By default, unused Disney World ticket admissions expire two weeks after their first use. In other words, you generally need to use up all the days in your ticket during your vacation or they expire. The first option we will look at, No Expiration, allows people to conserve the unused portion of their tickets. For instance, if a five-day pass is bought and this option added, a family who spends the weekend at Disney World in November (taking advantage of some of the most clement weather and lowest crowds in the weeks after thanksgiving) could then return for a three-day weekend in the Spring and use their days at that time.

No Expiration, however, may be something of a raw deal. While it may be the case that ticket prices will rise between the time base tickets with the No Expiration option are purchased and their eventual use at a park, placing the vacationer ahead of the game, the amount of dollars-to-days actually spent in the pursuit of tickets that don’t expire is higher than the price of a comparable base ticket. If coming from far away, guests will have to factor in their travel time and all the expenses associated with that, such as time off from work, gas or plane tickets (or both!), etc. There is no way to recoup the cost of No Expiration tickets either through refund or resale: Disney’s biometric scans link the tickets directly to the holder to prevent such tomfoolery.

Still, this may be a stellar option for people who visit Disney World every year, or at least on a regular schedule. It’s can also be a great deal for Florida residents, many of whom have the freedom to take a weekend trip to the World. Florida residents also enjoy special discounts on other types of passes, including the Florida Resident Premium Pass (good all year), which at over $500, allows not just admission but the park hopping option as well. All this goes for less than the price of one Annual Pass for a non-Florida resident. Florida resident or no, every Annual Pass holder enjoys discounts on room rates and free parking, which both help to defray the trip’s expenses.

The Park Hopper feature grants the bearer access to all of the parks at Walt Disney World, meaning you can go to multiple parks on a single day. This option is great, but knowing that it operates on a fixed scale is essential if the goal is to get the most mileage out of that hard-won pass. The flat-rate price of the option is about sixty dollars. This add-on is the same price whether it applies to a single-day ticket or a seven-day pass, so it probably isn’t cost effective unless used with a multi day ticket. Plus, if you are going to Disney for just one day, you probably don’t want to spend your precious time traveling between parks – just get to one park and enjoy it, since there is plenty to do in any one park.

Water Park Fun and More offers access to one of Disney World’s water parks…and more. This optional add-on works in much the same way as the Park Hopper; for a flat fee of about $50, ticket holders are granted access to either Typhoon Lagoon or Blizzard Beach, Oak Trail Golf Course, DisneyQuest indoor theme park at Disney Springs, or the ESPN Wide World of Sports Complex. It’s important to note that only one admission to one of these parks is allotted to each ticket with this upgrade. A single-day upgrade is much less economical, then, than simply purchasing admission to one of these smaller parks. But as with the Park Hopper, the flat fee covers as many days as the base ticket is good for; so, if applied to a seven- or ten-day pass, it really works out to the ticket holder’s benefit.

The amount of the down payment varies, but it is usually just a very small portion of the total. After down payment has been made, you will have locked in the prices for your vacation. This is important since the cost of everything at Disney – hotel, tickets, and food – generally goes up every year.  Then you can just pay a set amount each month until the vacation has been paid in full. This is a wonderful way to easily budget for a Disney World vacation.

Other Ways to Save at Disney World

In addition to finding great deals on Disney World tickets, there are other ways to save when visiting the park.

You can explore all that Disney World has to offer, yet still find ways to do so while keeping a little extra money in your pocket. Saving money on Disney World tickets, your room and the food that you eat does not have to mean an inferior experience. Instead, finding ways to save will allow you to have enough money to take part in some of the special events, such as behind-the-scenes tours that will make your visit even more memorable.