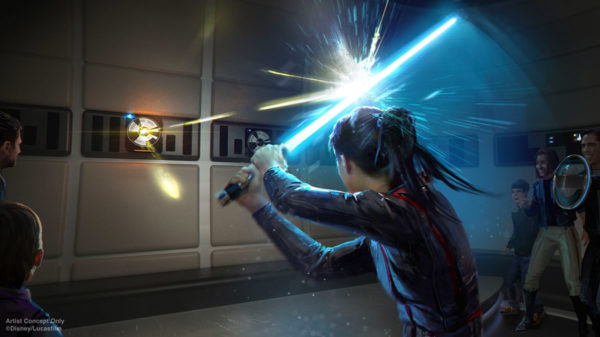 Attention Star Wars fans:  Your chance to reserve a spot for (what might be) the ultimate Star Wars fan experience is coming up later in 2020.

Disney is currently building the Star Wars: Galactic Starcruiser resort in the shadows of Star Wars: Galaxy’s Edge in Disney’s Hollywood Studios.  While the project is still being built out right now, it will open in 2021.

Disney has also announced it will start to accept reservations later in 2020.

The Galactic Starcruiser is unlike any other Disney resort.  It is a small, boutique hotel with just a few hundred rooms, vs. the many-hundreds of rooms in other Disney hotels. In comparison, the Grand Floridian has 1,000+ rooms and villas.

You also can’t stay for just one night.  The Starcruiser offers a two-day, and two-night all-inclusive, immersive experience. It is more like a trip on the Disney Cruise Line, but it will be focused on your playing a role in your own Star Wars story.

You will enter the resort, board a simulated shuttle, and blast off to dock with the Starcruiser.

During your stay, you will get to check out the many spaces of the Starcruiser, including the bridge and engineering areas.

You can take a themed shuttle from the Starcruiser to Batuu in Galaxy’s Edge where your own personal Star Wars story will continue.

Check out this video with more details about the experience:

How much will all this cost?  Disney has not yet announced pricing, but some rumors put it at $3,000 per person for the two-day experience.  Even at that price point, the small rooms are sure to be constantly sold out.

If you have the cash and want to be an early voyager on the Starcruiser, keep your eyes open for more announcements on when Disney will start to accept reservations later this year.

Star Wars: Galactic Starcruiser – Will you splurge and stay there?