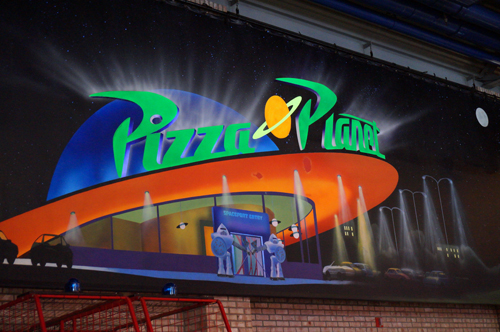 Four Popular Disney World Restaurants: Kids Love Them, Parents Maybe Not So Much

Besides its amazing attractions, Disney World is known for its fabulous food offerings. Signature restaurants serve up five-star quality food that you won’t find anywhere else in the world. There’s even an entire party dedicated to it: Food and Wine Festival. Disney Chef’s food is unique and high quality except when it isn’t.

Even quick-service, or “fast-food”, is usually delicious, but there are some dining spots that fall short. Kids will usually love these places because they offer basic food choices, but parents may be less than impressed. I’m not saying that these are the worst restaurants in Disney World, but there are some better options on which to spend your time and money.

The problem with this location is not the food since the entire family could eat here and find something satisfying. The problem arises in the arrangement of the restaurant, which is separated into three bays. Although there is some cross over (all of the bays serve the Grilled Chicken and the BBQ Pork), there are some meals that are specific to certain bays like the Bacon Cheeseburger in Bay 2 and, my personal favorite, the Rotisserie Chicken in Bay 1. If someone in your family wants one of these entrees, you may be forced to visit more than one bay, which means twice the line-waiting time, twice the ordering, and twice the waiting.

There is also a large audio-animatronic alien known as Sonny Eclipse who performs as the lounge singer. Kids love him, but parents may be annoyed by the loud singing combined with corny jokes. You’ll have to speak up if you want to carry on a conversation.

Unfortunately, reviewers have said that the food is less than impressive. Considering that the Liberty Inn is located in World Showcase, there are many other restaurants with a better menu. Little ones love the familiarity of American cuisine, but there are better places in World Showcase to spend your time and money.

Kids love the theming at Pizza Planet because it is inspired by the popular Disney Pixar movie Toy Story. Parents may not be so happy about the Arcade theme with the loud games and kids constantly asking to play them.

For the food, Disney’s Hollywood Studios’ Pizza Planet serves up exactly what you’d expect: pizza. There are different kinds of pizza, but you won’t get much variety here except for the Caesar Salads and Meatball Subs.

The seating is also a bit of a problem considering that most of it is upstairs. Since this is a quick-service restaurant, you’ll be carrying trays up the steps unless you want to wait for the very small elevator.

The last restaurant on our list is Pizzafari in Animal Kingdom. Although there is nothing overly offensive about this spot, and in fact the decorations are quite beautiful, they still serve mostly pizza. Disney will never win awards for their pizza, but it’s always a sure win for the kids. If you really don’t want pizza but that’s all your kids will eat, this is a decent choice. Go for the Meatball Sub, the Pasta Bolognese, or the Heart of Romaine Salad. Wash it all down with a Sangria or an ice cold beer while enjoying the colorful murals, and everything will seem right in the world.

What restaurant in Disney World do your kids love?
Leave your comments below.