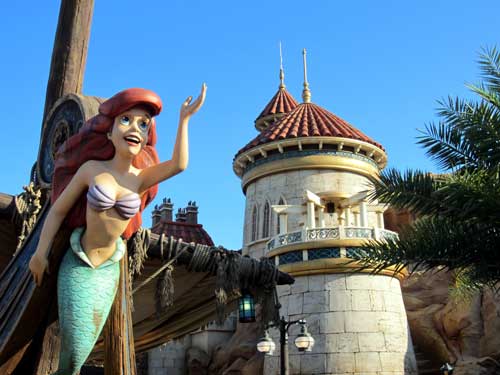 Secrets Behind The Five Best Queues In Walt Disney World

Every attraction in Walt Disney World tells a story.

These stories are sometimes quite clear, like trying to get to an Aerosmith concert on time on Rock ’N roller coaster or following along as a family experiences the wonders of new technology on Walt Disney’s Carousel of Progress.

Sometimes the stories aren’t as clear, as in the case of the spinner in Adventureland, The Magic Carpets of Aladdin (I think the story is we buy a flying carpet and then test it out in a whole bunch of circles!)

And sometimes the story begins before you even board the attraction in the amazingly elaborate and mesmerizing queues that the talented Disney Imagineers have designed to help make our time waiting to board a little bit easier!

Let’s take a look at the secrets behind the five best queues in Walt Disney World.

1 – The Twilight Zone Tower of Terror

One of the best themed attractions anywhere on the planet, the Twilight Zone Tower of Terror’s creepiness begins when you start walking up the ramp at the front of the queue toward the dilapidated old hotel. The eerie background music, overgrown gardens, and empty fountains let you know that this resort isn’t exactly well-maintained!

When you first walk inside that lobby, however, there’s almost too much awesomeness to take in! The lobby sits, untouched, since (as you later find out in the pre-show) that dark and stormy night in 1939. There are suitcases, room keys, newspapers, and even a coffee cup that look like they were just left there in an instant. The lobby truly is a moment frozen in time and it sets the stage for an amazing Disney attraction.

Once you get past the pre-show in the library you enter the boiler room and the creepiness factor is taken up to another level! Everything about the buildup to this attraction makes it really feel like you’re walking through an episode of The Twilight Zone!

Imagineering Secret: In the lobby of the attraction is a Mahjong game that’s been sitting, untouched on a table, since “1939”. To make it as authentic as possible, Disney brought in Mahjong players and asked them to sit at a table and play. Then, after they were well into the game, they were told to abruptly quit and leave the game right in the middle.

2 – Under The Sea: Journey of the Little Mermaid

One of the Magic Kingdom’s fantastic new additions, the Journey of the Little Mermaid tells the story of Ariel and her lifelong dream to be “up where they walk, up where they run, up where they stay all day in the sun.”

Like the rest of New Fantasyland, the exterior of this attraction, where the queue begins, is absolutely stunning! From Prince Eric’s castle to the waterfalls, beaches, and wooden bridges, this is really one you shouldn’t always use a FastPass for!

Once you get to the inside part of the queue, however, the real fun begins! There are interactive elements everywhere in the queue, from game-playing crabs to an audio animatronic Scuttle (Ariel’s seagull friend from the film who is also a self proclaimed human expert!) The interactive elements really add to the experience and make waiting in (a sometimes very long) line pretty much fly right by!

Imagineering Secret: Possibly the most elaborate Hidden Mickey ever created by Disney Imagineering can be seen in the queue of this attraction, but only for about seven minutes each year! The imagineers carved a section of the rock formations so that the sun can shine through on November 18th each year, which just so happens to be a famous mouse’s birthday! Look for Mickey’s famous three circle silhouette around noon on that date!

Call me a nostalgic, but I was originally pretty sad to see the Living Seas go the way of the dodo. I loved the hydrolators that would take you down into the depths of the massive ocean so you could experience the wonders of life at the bottom of the sea (check out this fantastic and funny story about the hydrolators).

However, once I saw what the Disney Imagineers were able to add to the attraction, I was thrilled! Nemo and his friends breathed some sorely-needed life into this Opening Day Epcot pavilion, and it all starts with a fantastic queue! Actually, it all starts with one of my favorite little gags in the Disney parks, the “Mine, Mine, MINE!” seagulls hanging out on the rocks outside the attraction.

Once inside the building, you are instantly blasted with that cold AC, the Finding Nemo music, and the sights and sounds of the beach. As you move further through the queue, you’ll move under the ocean’s surface and are transformed (not literally!) into a fish. Above you in one room you’ll even see the boat (or butt!) that Nemo famously touches in the movie bearing his name. There’s hardly ever a long line so you’d normally move pretty quickly through this queue, but I’d recommend slowing down and looking at everything around you!

Imagineering Secret: In the first room in the inside part of the queue is an Australian lifeguard stand with the designation “5A” on it. This is a reference to the pavilion’s previous attraction and is an homage to SeaBase Alpha (5A = SA).

So I have to be honest right here and say that I’m a Star Wars fan. Not like a “midnight movie premiere in a costume” fan, but a fan just the same. And since I am a fan, I was thrilled to have the chance to be a cast member at the Star Tours attraction in the mid 2000’s. What Star Wars fan wouldn’t be?!  I came to work every day wearing a plastic lightsaber on my belt and got into constant duels with kids who would be wielding their own Jedi weapons. That was awesome!

What wasn’t exactly awesome, though, during my time in an attraction far, far away, was the queue. The Star Tours attraction and queue had been around for an awful long time and a refurbishment was needed. Fast forward to 2011 and beyond, however, and the attraction and queue are two of the best on all of Disney property. The outside section of the queue boasts a giant AT-AT and the iconic Ewok Village (I had the play set as a kid!).

Once inside, the queue is designed like an intergalactic airport (spaceport?) where guests are being whisked off to far-away planets like Naboo, Tatooine, and the newly discovered Jakku. Complete with robotic TSA-like agents, baggage screening, and airport announcements (“Paging Mr. Egroeg Sacul!”), this is definitely a queue experience you won’t want to skip!

Imagineering Secret: One of the deactivated droids that is stashed away in storage on the left side of the queue may look very familiar to those who have flown on a Starspeeder before the most recent refurbishment. He is none other than Rex, the former unlucky pilot of the original Star Tours attraction.

Even if you’re a little too intimidated to ride this high speed coaster through the Himalayas in search of the mythical Yeti, you really need to at least walk through the queue! Expedition Everest has arguably the most visually stunning and detailed queue in any theme park, anywhere.

Disney Imagineers spent an incredible amount of time in Nepal researching and planning the design of the attraction and it’s queue, and it paid off. While walking through the almost museum-like queue, you are surrounded by cold weather clothing, mountain climbing equipment, and evidence and artifacts that prove the Yeti is actually real.

By the time you reach the end of the queue and are ready to board the attraction, you really feel like you’re getting set for an expedition to prove the Yeti exists. Everything from the newspaper clippings, posters on the walls, plaster casts of “Yeti footprints”, and the cast members themselves transport you to another time and place. If this one isn’t the best queue in Walt Disney World, I honestly don’t know what is! Make sure to bring your camera (okay, your iPhone) to take a lot of pictures because you won’t want to forget just how well the queue sets up the story of Expedition Everest!

Imagineering Secret: When you are about to board to take your journey through the Forbidden Mountain, you’ll notice the steam rising off the trains. Disney Imagineers wanted to make the trains seem as real as possible, but since they aren’t actual working steam trains they had to figure out how to have them emit steam. The solution was installing hidden steam vents under the train platform which spray out a non-water based steam, keeping the illusion of the steam trains in line with the rest of the story!

One of the reasons why the Disney theme parks are truly the best in the business is the complete immersion in the story guests experience in each land, show, restaurant, and attraction. Not all of Walt Disney World’s queues are absolutely unbelievable, of course, but most of them give guests an outstanding glimpse of what they will soon experience in an attraction or show. If I haven’t mentioned your favorite queue (and chances are, I haven’t!) please feel free to email me at phil@eartotheretravel.com to let me know which ones I’ve missed!

Do you enjoy the details in the queues at Disney World?