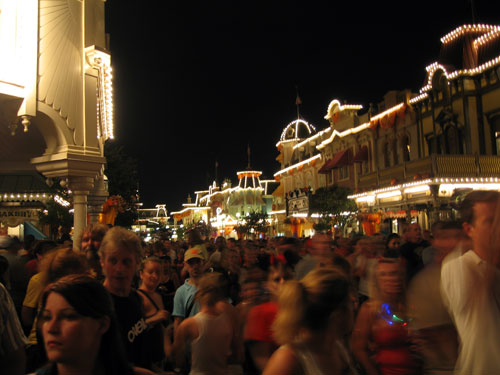 Has Disney World Lost Its Quiet Sense Of Class?

I recently read an article that suggested, basically, that Walt Disney World is too noisy and too full of loud entertainment, and as such it has lost a sense of timelessness, sophistication, balance, and class.

I definitely wanted to hear what you had to say about this topic, but first let me share a few details of the author’s argument.

Big entertainment brings out big crowds, and those crowds need to be controlled. That thankless job falls upon Cast Members, who with little more than their voice and a flashlight, have the job of making sure that hordes of people move efficiently and safely. That’s not an easy job, especially with people who are “checked out” of the real world and expect a little extra of everything on their vacation. As throngs of people of different languages converge, these days it seems some Cast Members have become a bit less friendly, resorting to shouting to keep some semblance of order.

It raises the question: At what point has Disney created situations and crowds so big that friendliness and order is no longer possible?

Pool: It used to be possible to head back to your Disney Resort Hotel in the afternoon for a quiet time at the pool. Yes, there are still quiet pools at the resorts, but most pools now have a party atmosphere, complete with a DJ and blaring Disney Channel-generated music.

Bus: Did you have a long day at the park? In the past you could enjoy a quiet, dark bus ride back to your resort, perhaps peppered with a few soothing comments or rumors from your friendly bus driver. Now, you are bombarded with pre-recorded music and Disney-promoting spiel.

Pre-show: Looking for a few minutes to unwind as you wait for Fantasmic to start? Sorry. Today, as you wait for the show, you will be entertained with trivia, games, and peer pressure to join in “the wave” as the auditorium is buzzing with noise and activity.

It raises the question: At what point has Disney crammed in too much entertainment so that you don’t get any down time or peace?

It seems that Disney is on the lookout for new locations to put stages for additional shows. There is the Tomorrowland Stage where Stitch made a short-lived run and now you can often find a DJ spinning loud tunes. Disney often assembles a stage in front of the The Great Movie Ride at Disney’s Hollywood Studios where you can find everything from Star Wars performances to appearances by bands and the characters from Monster’s Inc. Even Cinderella Castle itself becomes a stage on which Disney projects a show called Celebrate the Magic.

It raises the question: At what point has Disney created too many issues with traffic patterns, congestion, and noise?

What Do You Think?

Again, nobody goes to Disney World just to take a nap. People expect world-class entertainment, and lots of it. But do you think there needs to be a balance of experiences – a ride on It’s A Small World to balance out Space Mountain, and a quiet rest for a few moments on a bench to balance out the Main Street Electrical Parade? Or are you looking for stimulation of every one of your senses during every moment of your trip?

Do you think Disney World has become too noisy and less classy?