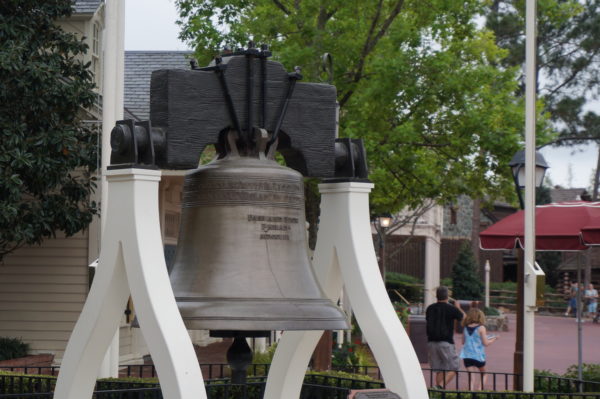 Liberty Square is located in Magic Kingdom to the left of the Cinderella Castle Hub between Adventureland and Fantasyland. Most people would consider this the back of the park. It also serves as a gateway to Frontierland.

Liberty Square started as Walt Disney’s idea back in the 1960s, but Disneyland just didn’t have the space. The idea was tabled because of this and other interfering projects like the 1964 World’s Fair and the planning and purchase of land for Walt Disney World in Orlando. Before he passed away, Walt created almost everything that needed to be done for Liberty Square, so as Magic Kingdom was being built, it was one of the inclusions. The land was popular because the country was approaching the bicentennial celebration in 1976.

Let’s take a look at the top ten things you need to know about Liberty Square so next time you’re in Liberty Square you can soak in all that it has to offer and recognize the details that most guests miss.

Disney is all about the story, and every story has to have a setting. The setting of Liberty Square is 1776 when the United States of America was declaring independence from Great Britain.

When designing Main Street USA, Imagineers asked Walt why he wanted everything to be so historically specific. His answer was that most people won’t notice the details, but they’ll notice if they’re not correct. The same is true in Liberty Square.

First, look down. Have you ever noticed the wavy brown path in the concrete at the center of the square? Maybe you have but never thought anything of it. In fact, this is, in a sense, an open sewer system. There was no plumbing in the Colonial villages, so sewage flowed through the streets.

Do you need to use the restroom? You’ll have to go to another land. Since there wasn’t any plumbing in Colonial America, you won’t find restrooms in Liberty Square.  At least that is the legend behind this land.

Another interesting detail is that the shutters are crooked. Have you ever noticed? Wondered why? In Revolutionary America, metal was in short supply. People would hang their shutters with leather. The leather would eventually wear, and the shutters would hang crooked.

Right in the middle of Liberty Square stands a 130-year-old oak tree. It’s another small detail that makes a big difference in the theming of the area.

The tree stood as a symbol for independence since colonists staged the first act of defiance at an elm tree in Boston. This meeting led to the Revolutionary War ten years later.

In Disney World, The Liberty Tree stands as a symbol of independence and history. This tree actually grew in another location, but Imagineer Bill Evans dug up and transplanted the tree to the location it stands now.

If you visit during a warm day, the tree provides welcomed shade. If you stop by at night, you’ll see 13 lanterns glowing in honor of the 13 original colonies.

At the center of Liberty Square near the Liberty Tree is the Liberty Bell. The Liberty Bell has long been a symbol of American independence with the first one being commissioned in 1752. It still stands in Philadelphia.

In 1976, as part of America’s 200th birthday, the original mold was put to work to create 50 more casts of the Liberty Bell. One bell went to each of the states, but Pennsylvania already had one, so they didn’t need or even want a replica. When Disney World realized that Pennsylvania had two, they contacted the powers that be and asked if they could have it for Liberty Square. They agreed. Appropriately, the Liberty Bell replica took it’s place in Liberty Square to honor all American colonies and states forever on July 4th, 1989.

One thing that Liberty Tree Tavern is known for is their year-round Thanksgiving meal. If you’d like to have Thanksgiving in July – or anytime for that matter – make your Advanced Dining Reservations!

Columbia Harbour House is a quick-service restaurant open for lunch and dinner with mostly seafood fare. They do have some chicken dishes including a delicious and period- appropriate chicken potpie. Columbia Harbour House has an almost hidden second floor that many people miss. It’s a fantastic place to eat because it’s usually calm and quiet compared to the rest of Magic Kingdom. It really is one of Magic Kingdom’s best kept secrets.

Haunted Mansion is a classic Disney attraction. The inside doesn’t really fit with the style of Liberty Square, but the outside is themed as a Tudor-style mansion on a hill, so it works.

The extensive and interactive queue features musical tombstones that honor Disney Imagineers. There is also a subtle puzzle that guests can work to solve.

Upon entering the attraction but before boarding the doombuggies, guests enter a stretching room. This was originally supposed to be an elevator that went down, but because the water table in Florida is so close to the surface, the top of the room pulls up, and guests don’t actually move. Also, the Florida version is larger than the Disneyland version mostly because there’s more room in Disney World. Thus, there are additional scenes that aren’t included in the one in California.

Liberty Square Riverboat is an authentic replica of the steam-powered paddle boats that carried travelers on the Mississippi and Missouri rivers in early America. It was an efficient and affordable way to travel that was also much faster than other methods available at the time.

This attraction is frequently over looked, underrated, and underutilized, which is unfortunate because it provides an incomparable look at parts of Frontierland, Liberty Square, Tom Sawyer Island, and Big Thunder Mountain.

During the 17-minute journey, riders will see a Native American Village, Wilson’s Cave Inn (from a Davy Crocket TV mini-series), forests, woodland creatures, Alligator Joe’s shack where he’s fishing for dinner, and more. The trip is narrated by Mark Twain who highlights sights and historical significance along the way.

Many people criticize this attraction because it takes up a lot of space, and the views feature underwhelming characters that don’t move in a park known for advanced audio-animatronics. Fortunately, the boat features some beautiful woodwork and lots of rooms to explore, so while you’re sailing on the Rivers of America, wander through the boat and take in its beauty.

The Hall of Presidents was originally Walt Disney’s idea, but it took some time to make it happen. There wasn’t any room in Disneyland for the attraction, so the idea was tabled. He also wanted the presidents to move and talk, but the technology wasn’t available back then.

The first iteration of Hall of Presidents was Great Moments with Mr. Lincoln at the 1964 World’s Fair. Disney and his Imagineers created one of the first audio-animatronic figures ever when they created Mr. Lincoln for the attraction. It was highly successful, and the figure was able to stand, and speak. After the fair, the attraction was destroyed, but Imagineers were busy building a new one.

When Magic Kingdom opened in 1971, Hall of Presidents was there. The original version of the show, which ran until 1993, allowed only two people to speak: Lincoln and George Washington.

The show was updated in 1993, and the current president spoke for the first time. Bill Clinton’s voice was difficult to recreate, so he agreed to record a speech for Disney’s popular attraction. Since then, George W. Bush, Barack Obama, and Donald Trump have lent their voices.

This highly patriotic attraction is an excellent lesson in American History from the Revolutionary War to the Civil War and beyond. It begins in a sit-down auditorium where a film highlights some significant points in American History. When the screens move out of the way, the curtain rises revealing an audio-animatronic figure of every US president.

The Muppets are a mainstay in Disney’s Hollywood Studios, but they’ve recently made an appearance in Magic Kingdom too. When Hall of Presidents closed for annual refurbishment in 2016, The Muppets filled the void.

The show began development in 2014. Actors perform the puppet show live daily, and they present abridged accounts of events in American History. Since the show is told by Muppets, things often go a little haywire – annoying the patriotic and serious Sam Eagle. It’s funny and flippant – and a lot of fun.

If you thought Thanksgiving all year was exciting, think about Christmas all year! In Liberty Square, that’s possible. Ye Olde Christmas Shoppe sells everything you need for Christmas like ornaments, stockings, trees, tree skirts, and more all Disney themed.

There are even special events seasonally!

Liberty Square was originally supposed to be an annex to Main Street USA according to Walt Disney. This plan was for California where space was limited. Since Disney World had so much room, Liberty Square became a land of its own, and rightfully so.

Liberty Square is appropriately located between Fantasyland and Frontierland. Fantasyland implies something unrealistic, while Frontierland is quite historical. Liberty Square and Colonial America, while very much a reality, is somewhat a mix of both. At the time, it seemed like a fantasy to separate from a home country and gain independence, but once it happened, reality struck and the wild west became a hard reality.

What’s more, there are bridges to the Cinderella Castle hub and Adventureland. Symbolically, Liberty Square and Colonial America are very much pathways to every other part of life as we know it.

Are you a fan of Liberty Square?