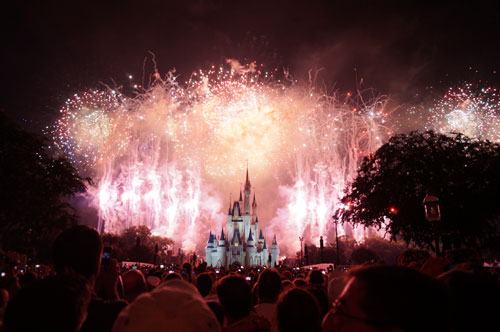 Walt Disney was a patriotic man.

Way back in 1917, at the tender age of 16 years old, Walt joined the Red Cross ambulance corps so that he could serve his country in World War I. Walt used the resources of his company to produce propaganda and training films during World War II.

You can still see plenty of signs of the marks of Walt’s patriotism in the Walt Disney Company – from Liberty Square in the Magic Kingdom to the American Adventure in Epcot.

Another way you can see this patriotism is in how Walt Disney World celebrates the July 4th holiday.

Disney loves many a celebration, but really goes all out for Independence Day.

Here are some of the ways Walt Disney World will celebrate Independence Day 2014:

At 9:00pm on both July 3 and July 4 Disney will present a fireworks show above Cinderella Castle called “Disney’s Celebrate America! A Fourth of July Concert in the Sky”. Disney bills the show as one of the most elaborate shows ever seen at a Disney park.

The Voices of Liberty a-cappella group will perform at 12:30pm, 1:45pm and 3:00pm at the America Gardens Theater.

Disney will add a special patriotic tag, or bonus ending, to “IllumiNations: Reflections of Earth” which will take place at 10:00pm.

Not to be outdone, Disney’s Hollywood Studios will present a “Rockin’ 4th of July Celebration”, which includes a live band that will play during the fireworks show at 10:15pm. Disney will also present a dance party with performances by both a DJ and a live band, the Hollywood Rockers, between 6:00pm and 11:00pm.

Do you like the July 4 fireworks at Disney World?