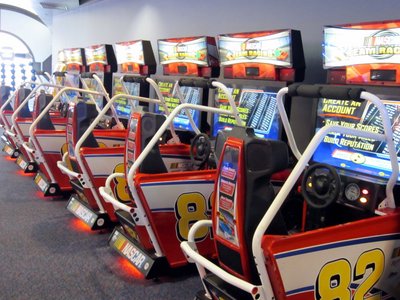 Disney World Arcades – Where And Why

Many of the experiences at Disney World are passive – you site in a Doom Buggy and glide by scenes of ghosts in the Haunted Mansion, or you site in a theater and watch the history of American unfold before you in the American Adventure. And those are terrific experiences. But some people like more interactivity – the ability to influence the story. Disney is making more of this happen, specifically in Buzz Lightyear Space Ranger Spin in the Magic Kingdom and the tremendously popular Toy Story Mania in Disney’s Hollywood Studios.

While Disney is working to build more interactivity into the theme park attractions, they already have many different – even old-school – interactivity opportunities. They are called arcades, and yes they are very much like the ones where you live.

It turns out that many people like arcades – that is why you have them where you live too. For twenty-five or fifty cents (or much more), you get a few minutes of entertainment – maybe more if you are skilled.  And you control the fun.

But why would someone want to visit an arcade at Disney World, where there are so many other things to do? Well, I don’t know of anyone who travels to Orlando and spends their entire vacation inside a Disney arcade, but plenty of perfectly normal folks like to take a few minutes here or there to enjoy this form of entertainment. Visiting an arcade can be a nice change of pace on a slow day, or when you need to pass some time on a rainy day.

Where Are The Arcades?

You might be surprised to learn that there are more than 20 different arcades on Disney property – one in each hotel owned and operated by Disney, plus an arcade at the exit to Space Mountain in the Magic Kingdom and another in the Pizza Planet restaurant located in Disney’s Hollywood Studios.

There is also Disney Quest, which many would consider to be an arcade since it has plenty of traditional arcade games, in addition to many other unique experiences which really put it into a league of its own.

With the exception of Disney Quest, the arcades through the Disney World resort hotels and the parks are very basic and very typical. They don’t really have any special Disney theming, and the games you can play are pretty much the same ones you will see in any other arcade in any other place.

Most games cost between fifty cents and a dollar, although there are some that are twenty-five cents as well as others that cost more.

Some machines issue tickets that you can accumulate and exchange for prizes, like small generic trinkets or plus animal toys.

So while the arcades aren’t a main attraction, they can be a fun and inexpensive way to pass a little time. And afterwards you can get back in line for Toy Story Mania.

What do you think about Disney arcades?