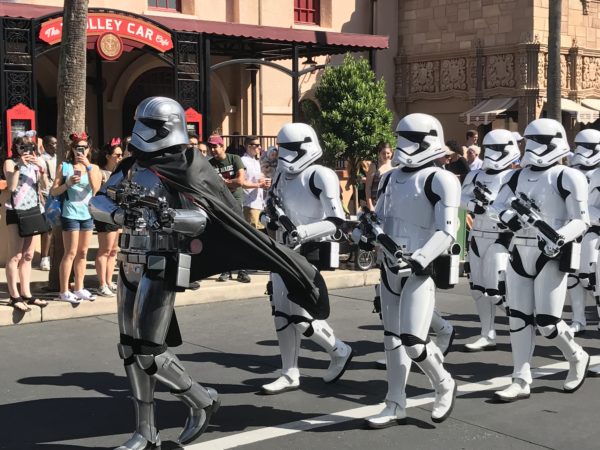 Ever since Disney World announced that they were building an entire Star Wars-themed land, the story has been a focal point for Disney fans.

However, there is already a lot for Star Wars fans to do in Disney World.

Let’s take a look at the top nine attractions for Star Wars fans in Disney World.

Star Tours was the first Star Wars activity in Disney World. It opened in Disney’s Hollywood Studios in 1989 and was replaced with a new show in 2011 called Star Tours – The Adventure Continues.

Star Tours is a 3D motion simulator, so you’ll pick up your 3D glasses on your way into the show. Once you’re seated in the Millennium Falcon, a Cast Member will close the door, and you’ll experience one of several unique show sequences featuring clips from the Star Wars films.

Located in Animation Courtyard, this interactive walk through attraction is much more than just a gift shop, although you can purchase souvenirs here. There are also movie props, photo opportunities, videos, meet and greets, and games to play.

Star Wars: A Galactic Spectacular has been around in some rendition for almost eight years. The nighttime show based on Star Wars is full of fun special effects including fireworks, projection mapping, fire, lasers, fog, and searchlights. The show is very cool, so stop by the Chinese Theater on Hollywood Boulevard to check it out. You won’t be disappointed.

The Void is a 3D immersive experience that will transport your whole body to the land of Star Wars. The attraction is set to open this Christmas and will be in Disney Springs. It’s called Star Wars: Secrets of the Empire, which is a giant hint to me that there will be some unique experiences that you can’t find in the movies or at Hollywood Studios.

Star Wars fans want to meet their favorite Star Wars characters, and you can do just that in Star Wars Launch Bay.

Chewbacca, the fuzzy gentle giant and Han Solo’s loyal comrade, is happy to meet you with a big, furry hug. BB-8, also loyal to the Resistance, will also meet and pose for a picture, but he has to check to make sure you weren’t sent by the First Order, who is hunting him. Kylo Ren, who is part of the First Order, also appears in Star Wars Launch Bay, but be careful- he might try to persuade you to join the Dark Side.

6. Star Wars: Path of the Jedi

Star Wars: Path of the Jedi is a 10 minute film in Disney’s Hollywood Studios’ Echo Lake section. The film retells the story of the Star Wars saga starting with Anakin Skywalker and moving down to his children, Luke and Leia. Fans of all ages will enjoy the movie, and if you’re not familiar with Star Wars, this is a good primer.

Star Wars Galactic Nights is a special hard ticket event held every year at Disney’s Hollywood Studios. It’s family friendly, and there are some special guest appearances and even more character meet and greets than on a regular day. The attractions are also open for the party. This is also one of the few times that kids and adults alike can dress up in costume while in the parks.

Star Wars: A Galaxy Far, Far Away is a live stage show that takes place several times daily in front of the Chinese Theater where The Great Movie Ride used to be. Even when the attraction inside is replaced with Mickey and Minnie’s Runaway Railway, this show is expected to continue since Star Wars will be a focus of the park.

The show begins with a Stormtrooper Procession led by Captain Phasma as a large screen appears in front of the theater. Clips from the movies begin to play on the screen and characters like Rey, Kylo Ren, Chewbacca, BB-8, Darth Maul, and Darth Vader appear on stage! Together, they recreate famous movie vignettes.

If all of this sounds fun, but you’d like to get preferred entry, consider signing up for the Star Wars Guided Tour. This tour, which has limited capacity, will provide tourists with a well-informed Cast Member who will provide Star Wars Trivia throughout the tour.

On the itinerary are visits to Path of the Jedi, Star Wars: A Galaxy Far, Far Away, and March of the First Order reserved seating, Jedi Training: Trials of the Temple for ages 4 through 12, a visit to Star Tours, a Star Wars-inspired meal for lunch at the Backlot Express, a character greeting with Kylo Ren and Chewbacca then Star Wars Launch Bay, Star Wars: A Galactic Spectacular at night, and a personalized souvenir for you to take home.  The tour is $99 per person.