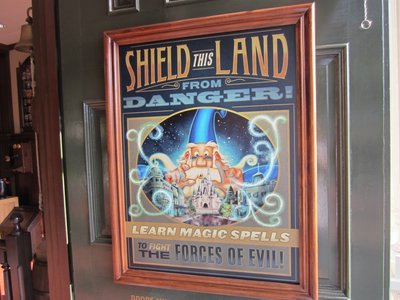 The year of 2012 was especially busy at Walt Disney World. Between a new Disney Resort Hotel, a vastly updated land in the Magic Kingdom, and many other experiences and upgrades big and small, there was plenty of Disney news to report and photographs to take.

I’m sure I’m missing some items from my list, but here are some of the big events of 2012 as I remember them:

Sorcerers of the Magic Kingdom

On February 22, 2012 Disney formally launched a new interactive game called Sorcerers of the Magic Kingdom. Get your spell cards and follow a map to look for carefully hidden (integrated?) stations around the park.

Plenty happened at Disney World in 2012.

On February 29, 2012 Disney held One More Disney Day on leap year, where you could spend a full 24 hours enjoying the Disney parks. And it seems that many brave, and ultimately tired, folks took advantage of the event.

On April 17, 2012, a piece of Florida nostalgia returned to Adventureland when the little Orange Bird returned to the Sunshine Tree Terrace.

On June 23, 2012, Agent P officially took over for Kim Possible in an interactive game played around the Epcot World Showcase.

Starting on May 13, 2012 and then proceeding to open additional wings in phases, Disney’s Art Of Animation Resort became the latest Disney Value Resort to open – completing the unfinished half of Disney’s Pop Century Resort that was originally planned to hold the Legendary Years.

Disney conducted various tests of FastPass Plus throughout the year. Look for more testing to continue into 2013, and perhaps some information on a roll out plan.

On October 18, 2012, a shorter version of the Country Bear Jamboree show debuted. Thankfully many of the classic moments of the original show remained, and it is as fun and politically-incorrect as ever. Just shorter.

On October 1, 2012, Disney celebrated the 30th Anniversary of Epcot with presentations, anniversary merchandise, and a special park map. Perhaps wary of celebrating too many anniversaries too often, the event was relatively low key from a marketing perspective but was great fun for die-hard Disney fans.

The Legend Of Captain Jack Sparrow

On December 6, 2012, Disney opened a new walk-through attraction at Disney’s Hollywood Studios called The Legend Of Captain Jack Sparrow. Based on the ever-lasting Pirates Of The Caribbean franchise, you are encouraged to participate in the fun by stomping and chanting along.

Also on December 6, 2012 Disney officially opened the new Fantasyland in the Magic Kingdom, although all of the components of the land had been in some form of soft opening in the months before. New fun includes Storybook Circus, Enchanted Tales With Belle, Gaston’s Tavern, Bonjour Village Gifts, Journey Of The Little Mermaid. It seems that Disney did a terrific job with this new land – great story telling and plenty of details.

December 6, 2012 (obviously a big day) also saw the opening of the upgraded Test Track, now sponsored by Chevrolet instead of GM. Looking very modern and like stepping into the world of Tron, you can design and test your own car.

On December 19, 2012 Disney opened the Splitsville bowling alley in the West Side section of Disney Springs.

What do you think about all the events of 2102?