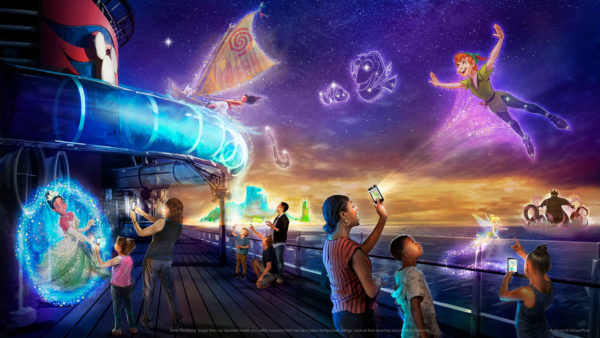 The Disney Wish will offer a new interactive experience called Disney Uncharted Adventure that uses augmented reality and physical effects.  It will include Moana, Tiana, Peter Pan, Nemo, and other Disney characters.

Guests will use the Play Disney Parks app as an enchanted spyglass to solve puzzles and quests.

They can use the spyglass to reveal new views in the stars and constellations that take the shape of Disney and Pixar characters and icons in a choose your own adventure story.

Guests can work together with up to six devices and can share devices as well.

Disney Imagineers state that the goal of the game is “heads up,” and is designed to foster interaction between game players.

Excited to see a new augmented reality game on the Disney Wish?