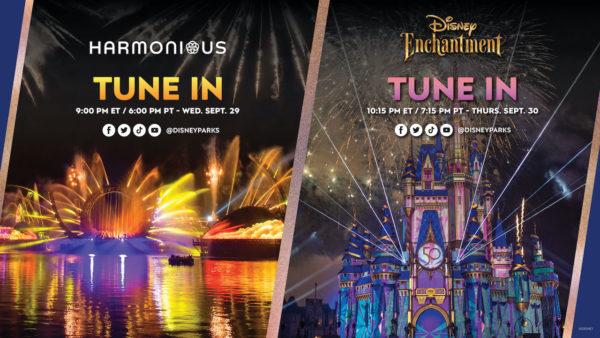 If you aren’t able to make it to Walt Disney World for the kickoff of the 50th-anniversary celebration, you will be able to watch two new nighttime spectaculars from home – even before their official debut on October 1, 2021.

EPCOT’s new show, presented on the World Showcase Lagoon, is a tribute to songs and stories that unite people around the globe.  It includes fireworks, fountains, lighting, and media presented together with new interpretations of Disney songs performed by artists from around the world.

You can check out a preview of the Harmonious soundtrack.

The Magic Kingdom will come alive with projections on Main Street USA, which will join fireworks, a new song by Philip Lawrence, and key moments from classic Disney films.

Will you stream Harmonious and Disney Enchantment from home?