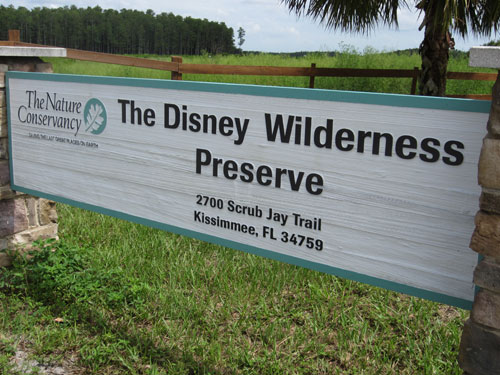 Have You Ever Visited the Disney Swamp?

The Disney Swamp isn’t a new attraction or a video game.  It’s a real place in central Florida that you can visit for free.

It is managed by The Nature Conservancy – an organization that works to protect ecologically important lands and waters for nature and people.

The Conservancy manages more than 119 million acres of land across all 50 states and in 35 different countries.

But what does all this have to do with Disney World?  Actually, quite a bit.

Back in the 1980s The Walt Disney Company purchased 8,500 acres of land in southern Kissimmee, about a 45 minute drive from the main Disney property. This land used to be a cattle ranch, and at that time, it was destined to become new houses and commercial development. This land was physically very removed from all of the things that people normally think of when they think about Disney;  it was far away from the Magic Kingdom and all the other parks and resorts.

So what did Disney want with this land so far away from its main property? Was it room for expansion? In a way it was.

Disney purchased the land as a way to mitigate the environmental impact of the development it had planned on its main property. In other words, Disney purchased and transferred this parcel of remote land to the Nature Conservancy so that it would remain natural.  In doing so, they were able to commercially develop more land which was originally set aside for conservation at their main site.  This means more theme park attractions, resorts, and shops for us to enjoy while Disney is still able to keep its environmental commitments.  This “mitigate elsewhere” process was made possible by the US Clean Water Act.

Disney paid to restore the land from being a ranch to being a natural swamp, or more specifically, the current politically correct term is wetlands. Disney also continues to fund projects at the site.

Upgrades To The Wetlands

In order to restore the land to its natural condition, the Conservancy worked to remove non-native plants and also conducted controlled burns to restore health to those areas which burn naturally. It is interesting to note that fires and burning of the land is part of the natural growth process of the central Florida environment,  a process that nature spurs on with the frequent lighting strikes in the area (Central Florida is known as the lightning capital of North America).

They carefully restored the land to its original condition as the first Spanish missionaries to the area described in their travel documentation.

In 2012, about 30 years after the initiative began, regulators called the transformation of the property back to its natural state a success. The project is considered a model for how organizations can still grow their business and protect the environment.

Locally, the project has improved the quality of the water that feeds the Everglades in southern Florida since this park is at the head or the watershed of that huge natural environment.

Visitors can check out the Disney Wilderness Preserve from 9am – 5pm Monday through Friday. It is closed on weekends and holidays. Unlike the ever-increasing ticket prices at Disney World, there is no fee to get into the Preserve, although they do accept donations.

However, don’t expect a slick Disney experience with parades, characters, and rides.  This is a natural, rustic location, much more like a state park than a Disney theme park.

At the Preserve, you can enjoy old-time Florida beauty as you hike on trails or watch for animals. In the past people, have seen bald eagles, wood storks, southeastern big-eared bats, and gopher tortoises on the site. Staff at the parks have even recorded activity of the rare Florida panther on the grounds.

For those who enjoy spotting plants, you can see native grasses and palmetto as well as lilies and terrestrial orchids.

The preserve is located at this address:

From the main Disney property you can head east on highway 192, then take a right and go south on Pleasant Hill Road for about 25 miles.

Disney does not promote the Preserve to guests on Disney World property.  A taxi would be expensive so if you plan to go you probably need to drive your own car.

Have you ever visited Disney’s Swamp?