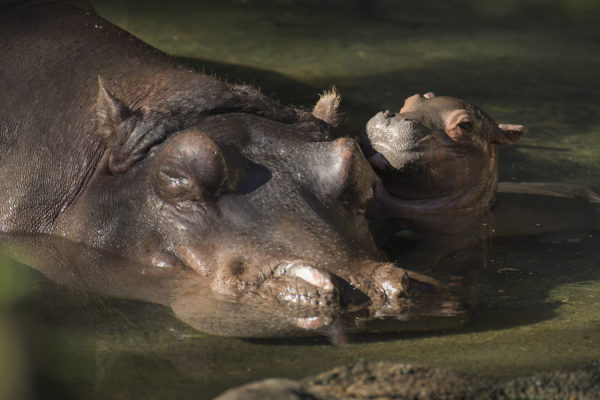 A Nile hippopotamus was born at Disney's Animal Kingdom in Lake Buena Vista, Fla., Saturday, Jan. 13, 2018. This was the first hippo born at the park in 13 years, marking another success for the dedicated and highly trained team of Walt Disney World animal care experts. The mother hippo, Tuma, and her mate, Henry, were chosen to breed through the Species Survival Plan (SSP), which is overseen by the Association of Zoos and Aquariums. Disney's Animal Kingdom guests may see Tuma and her calf on Kilimanjaro Safaris and during the Wild Africa Trek experience. (David Roark, photographer)

Around 10pm on January 13th, 2018, a Nile hippopotamus was born to Mom, Tuma making this the first hippo born in Disney’s Animal Kingdom in 13 years.

The baby is backstage with Tuma, and the Animal Care Team is keeping a close eye while provide them plenty of time to nurse and bond, and Disney hasn’t given any specifics like weight or gender.

Soon, the new baby will appear on stage for guests to see either in Kilimanjaro Safari or the backstage tour, Wild Africa Trek.

Disney participates in the Species Survival Plan, which is overseen by the Association of Zoos and Aquariums, and they chose Tuma and father Henry as part of this program.

This may not seem like a big deal, but it really is. The International Union of Conservation of Nature says that hippos are a vulnerable species putting them just one step away from being endangered.

Disney takes their animal care seriously; they even train their hippos to open their mouths on cue so their teeth can be checked regularly. The birth of a new member of a nearly endangered species has to be a big deal for these caretakers.

New baby hippo at Disney’s Animal Kingdom?  Cute, or what?