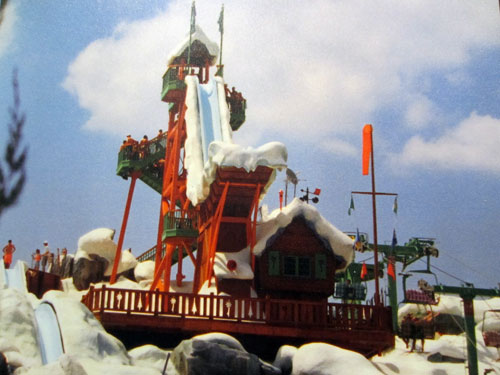 Fans of these parks love to debate which is better, but many Disney World guests have never visited either park because of the extra cost associated with purchasing the Water Parks and More Option in addition to the standard base ticket cost.

If you’ve never been to Disney’s water parks, you’re missing out! They’re both fantastic and lots of fun. If you want to choose which park is right for you, keep reading because this is the article will help you do just that!

Both parks are based on the impact of a natural disaster.

Typhoon Lagoon is like a tropical island that has been hit by a typhoon. At the entrance, you’ll see Miss Tilly, a shrimp boat that has run aground on top of the park’s Mt. Mayday. The Lagoona Gator, who is related to Blizzard Beach’s Ice Gator, is Typhoon Lagoon’s mascot. The beautiful, dense vegetation makes this park very beautiful and enjoyable.

Blizzard Beach, on the other hand, is a winter theme set in Florida. You see, Florida was hit by a freak snowstorm, and some entrepreneurs decided to take advantage of this by building a ski resort. However, the snow melted and left the resort useless. As they were preparing to shut down, they heard an Ice Gator having lots of fun water tubing down Mt. Gushmore. They realized that the resort had potential and reopened as a water park. The slides maintain ski-slope ratings making the story more realistic. However, the downfall of this park is that it’s more white concrete than pretty vegetation.

Both resorts have strong theming. Typhoon Lagoon’s theme is a bit more believable for Florida, but Blizzard Beach is a more complicated theme. Although I hate to think of snow during my Disney vacation, I have to give the win to Blizzard Beach since it accomplished a much more difficult theme.

Typhoon Lagoon’s primary water slide is the Crush n Gusher, which is a water coaster that not only drops riders but also launches them upward with water. It’s a unique ride and unlike other water slides. Even better, the waits aren’t very long!

Not to be outdone, Blizzard Beach’s Summit Plummet is one of the highest in the world at 120 feet tall. It launches guests at 60 miles per hour down an almost straight drop. Some people say that the wait time for this ride is too long for the few seconds of enjoyment, but if you like water slides you have to do it at least once!

One might think that Typhoon Lagoon would win this category because of the unique water coaster, but I have to give the win to Blizzard Beach. However, this win is not entirely for Summit Plummet but also for the racing slides at the park and the Teamboat Springs ride, which is the world’s longest family raft ride.

Typhoon Lagoon’s Surf Pool is quite large at 2.7 million gallons. It hurls six foot waves every 90 seconds. Although this wave pool is a ton of fun, it requires strong swimming skills, so it may not be appropriate for young children.

Blizzard Beach also has a wave pool called Melt-Away Bay. This one acre pool is much more mild than Typhoon Lagoon with smaller, shorter waves fed by waterfalls of “melting snow” from Mt. Gushmore. Because of this, it is good for young children.

This is a hard category to call because Typhoon Lagoon is great for thrill seekers and strong swimmers, but Melt-Away Bay is better for younger guests or those without sufficient swimming skills. Purely for the excitement, I’m going to call Typhoon Lagoon as the winner for this category.

Typhoon Lagoon’s Castaway Creek is a 2,100-foot long lazy river the winds around the entire park passing by waterfalls and through rainforests and mist screens.

Blizzard Beach’s version of the lazy river is Cross Country Creek. It’s 3,000 feet long and has seven entrances/exits. At one point, riders float through an ice cave and are splashed with melting ice from the cave’s ceiling. What’s really nice about this river is not only is it unique and fun, but it can work as a transportation system for guests to get from one area of the park to another rather than walking.

Because of the multiple uses of the Cross Country Creek lazy river, I have to give the win to Blizzard Beach.

Typhoon Lagoon’s Ketchakiddie Creek is a great area for young children because it’s basically like a splash pad with age-appropriate slides, water fountains, and spray features. There’s also a tugboat and ocean animal décor. Kids and families can hang out on the sandy beach and enjoy the day away from the big slides that would be too much for young kids.

Blizzard Beach has two kids’ areas! Tike’s Peak is specifically for young guests with water slides that are simply small versions of the regular slides. Kids can play in the snow castle fountain, and families can grab a picnic bench to relax on. Ski Patrol is a separate area that is more geared towards pre-teens (kids under 12). The Leisure Pool has a water obstacle course, and there are a couple water slides. Fahrenheit Drops is a zip line that takes riders under 5ft tall over the pool and drops them into it at the end.

Because of the variety that Blizzard Beach offers for guests of all ages, it wins the kids’ area category.

Besides the water slides, fountains, and pools, both parks feature something extra. Some of these activities are included in park admission while others cost extra.

Just outside of Blizzard Beach, guests can try their hand at mini-golf at Winter Summerland. There are two 18-hole courses; one is summer themed and the other is winter themed. This activity does cost extra, but you don’t have to have a water park ticket to play, and there are usually coupons in your welcome book.

Typhoon Lagoon’s Surf Pool is open for surf lessons at a cost of $165 for a two and a half hour lesson. You’ll have to be an early bird for these lessons because you’ll be scheduled before the park opens. If you already know how to surf, you can rent the surf pool for you and your friends for a cost of between $1,100 and $2,100.

Typhoon Lagoon wins this category because of the really cool activities provided within the park’s limits.

Both parks have similar set ups when it comes to food and drinks. There’s a main quick-service location with smaller food stands throughout the park. There’s also a main bar area near the wave pools in each park. All locations accept the Disney Dining Plan, and you can even purchase a refillable mug.

The mugs at the water parks work a little differently than the resort mugs, though. You pay $9.99 for the mug, so it’s a little cheaper than the resort mug, and you can refill it as many times as you want throughout the day. However, it only works for one day; if you plan to visit the water parks for two days, be sure to purchase the barcode sticker for $6 to enable your mug to work for multiple days. Even at a $15 price tag, this is a good buy. If you refill it even four times throughout the day, it’s likely paid for itself.

Food is pretty standard in both parks including burgers, pizza, and chicken nuggets. These quick-service items are the same throughout the parks, so you’ll know what to expect. Each park has a few special items though. Blizzard Beach serves up a shrimp roll and mini donuts. Typhoon Lagoon has special burgers: try the Black Bean Burger or the Plantain Burger.

This category is going to have to end in a tie.

Which Disney water park is your favorite – Typhoon Lagoon or Blizzard Beach?