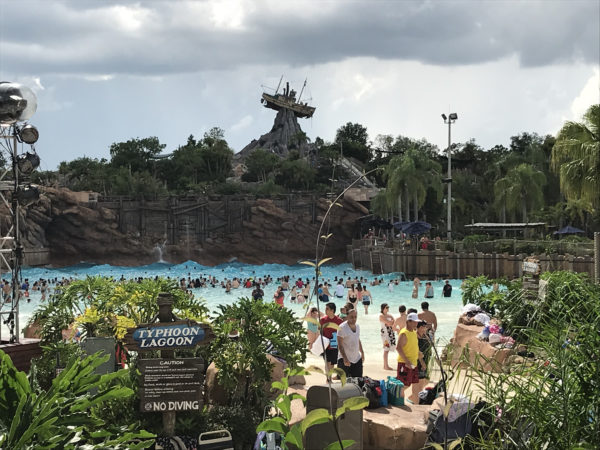 Both parks are really cool, so let’s take a look!

Disney’s first official water park, River Country, opened in 1976. It harkened back to the hometown swimming hole with water from Bay Lake an also freshwater among ropes and other obstacles, water slides, a beach, and more.

The park closed for refurbishments in 2001 and never reopened. Some say it was because the water from Bay Lake was dangerous and others say it was because of the economic downturn and decreased tourism resulting from the 9/11 terror attacks. Still, others say that the overwhelming success of Typhoon Lagoon, which opened in 1989, and Blizzard Beach, which opened in 1995, led to fewer visitors at River Country. In reality, it was probably a combination of all of the above.

Whatever the cause, the land that was River Country sat untouched until recently. It is prime real estate, though, between Disney’s Wilderness Lodge and Disney’s Fort Wilderness Resort and Campground, and, since 2016, has seen activity to renovate the area into Reflections – A Lakeside Lodge.

2 – There are plenty of characters

While these characters are exclusive to the respective water parks, you can also see some of your favorite Disney characters in the parks, and they’re even dressed appropriately, which means you’ll only see characters dressed in their water park (or scuba!) attire in the water parks.

2 – Learn to surf at Typhoon Lagoon

If you have some extra money burning a hole in your pocket, consider signing up for surf lessons at Typhoon Lagoon! There are a couple of stipulations, though. First, the surf lessons are in addition to your regular Water Park admission. Also, you have to be an early riser because the lessons take place early in the morning before the park opens for the day. The surf lessons offer you one-on-one coaching in the park’s giant wave pool, so it really is a cool experience!

Disney’s water parks offer lots of water slides, but Summit Plummet at Blizzard Beach is the fastest. It positioned at nearly a 90-degree angle and is 12 stories, or 120 feet high, which is one story, or 10 feet, shorter than the drop at Tower of Terror. It sends riders zooming down the hill at up to 60 miles per hour making it the tallest and fastest freefall body slide on property.

4 – There are Lazy Rivers at both parks

While there are lots of exciting activities to do, there are also plenty of places to relax including the huge lazy rivers in both parks! Typhoon Lagoon’s Castaway Creek is 2,000 feet long, and Blizzard Beach’s Cross Country Creek is 3,000 feet long! So float the day away on a relaxing raft. It is a vacation after all!

In true Disney fashion, both parks have an interesting backstory, but Blizzard Beach’s backstory is a favorite.

As the story goes, Blizzard Beach was formed when a freak snowstorm hit Florida, but when temperatures returned to normal, the ski resort that popped up in the snowstorm had to close down. The ice and snow melted, and it seemed like all hope was lost. However, one of the alligators who had taken up residency in the ski resort and became quite fond of the snow. He could be seen sliding down the ski jumps and splashing into the water below convincing guests to return and do the same. These new snow slides became quite popular with locals!

Even the chair lift from the ski resort is still in use! The working chair lift complete with beach umbrella canopies takes visitors to the top of Mount Gushmore where you can get in line for three of the park’s top-tier attractions.

Over at Typhoon Lagoon, a freak storm caused Miss Tilly to run aground on top of Mount Mayday. The area has now been turned into Miss Adventure Falls and is owned by Captain Mary Oceaneer, who is also a member of Disney’s secret society, the Society of Explorers and Adventurers. Members of SEA can be found in storylines throughout the parks and on Disney Cruise Line.

8 – There are millions of gallons of water!

All of those attractions have to hold lots of water!

Typhoon Lagoon’s massive wave pool, where surfing lessons also take place, holds an impressive three million gallons of water making it one of the largest wave pools on the continent! Every 90 seconds, the pool sounds a large horn and sends six-feet tall waves blasting into the pool.

Crush ‘n’ Gusher, which drops riders into the wave pool, pushes riders with 1,350 gallons of water per minute which could fill a regular home pool in one minute!

One of the most popular snacks at the water parks is the made-to-order mini donuts, but it’s a little-known treat to those who don’t frequent the water parks because they’re not offered anywhere else. The MTO donuts are served hot and coated in cinnamon sugar, and they are delicious!

As of the publication of this article, Disney has not announced reopening dates for the parter parks.

Miss the Disney Water Parks?  Which is your favorite?