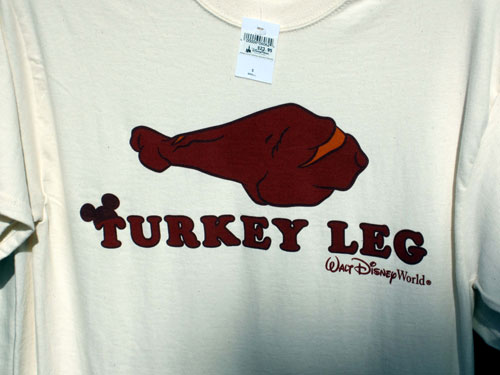 It’s Thanksgiving and that means it’s time to talk turkey!

Of course, in Walt Disney World, it’s all about the world-famous Turkey Legs. These prehistoric-looking treats made their debut in Frontierland in the late 1980’s at a single stand near Big Al’s Coonskin Caps. Since then, the legs have made their way into all of the WDW theme parks and Disneyland as well. Have you ever thought about where the legs come from or how they got so big? Well, I did a little bit of digging this week, and I found some answers! Let’s check out some Turkey Leg Tales!

First off, if you think these have to be from some big turkeys, you’re exactly right! Well, half right, I think. These turkeys are genetically engineered in a laboratory somewhere in the Southwestern part of the United States. They have been cross-bred with emus and ostriches in order to get that size, resulting in the jumbo Turkey Legs that we get in the parks. Okay, none of that is true!

These turkeys are actually Upper Midwestern turkeys that range between forty and fifty pounds. That means, each turkey leg that you buy in the parks weighs in at about 1.5 pounds! These legs come from some big birds! I think the frozen turkey that I bought for Thanksgiving this year weighed in at about 23 pounds so I can’t imagine what a 50 pound Thanksgiving turkey would look like on my dining room table!

Nationwide, Disney sells more than 1.6 million Turkey Legs every year in the theme parks. That number absolutely astounds me. If you don’t think that sounds like a lot, imagine 800,000 turkeys showing up outside your front door right now, and you’ll have an idea of just how many gobblers are sold in the Disney Parks every year. By the way, that is over 2.5 million pounds of turkey consumed by park guests on an annual basis. Crazy, right?

One of my favorite memories I have from my many years of going to Walt Disney World on vacation involves a Turkey Leg. Several years ago my wife and I were sitting on a bench near Cinderella Castle and were noticing all of the little kids being pushed past us in strollers. There was an ice cream cart nearby and most of the little ones were eating Mickey Mouse ice cream bars. All of a sudden a stroller came around the corner with a little boy who was about 4 years old inside and munching on a huge Turkey Leg with a big smile on his face. I’ll never forget both how happy he looked and how much he looked like a tiny little caveman!

Whether you’re a fan of them or not, Turkey Legs have become just as iconic a part of the parks as the Mickey Ice Cream Bar, the Dole Whip, or the Mickey Mouse shaped pretzel!

Do you enjoy Disney Turkey Legs?