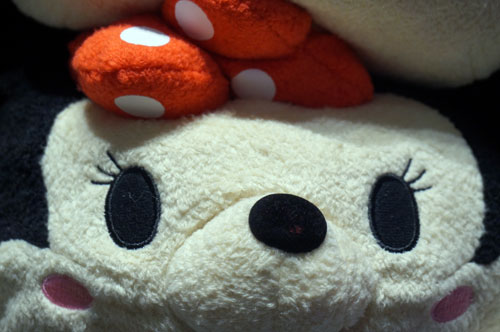 Have you heard about Disney Tsum Tsum?

Tsum Tsum, pronounced “tsoom tsoom”, are round plush toys. They are super-cute in a Japanese-type of way. They are also unique and very collectible.

These toys are not just round and cute, but they also stack. In fact, the Japanese words Tsum Tsum roughly translate to “stack stack”. These plush animals are designed to sit on top of one another to create a pyramid of cute little Disney character faces.

It was about 20 years ago that we saw the Beanie Baby craze. Made by a company called Ty, you might recall that Beanie Babies were little stuffed animals filled with beans. These little toys were so popular that some folks thought that these little collectibles would be worth big bucks someday. That didn’t happen.

While I’m not sure that you might be able to retire when you sell your Tsum Tsum collection in the future, it does look like we might be at the start of a new trend.

Disney created a mobile game that is much like the game Tetris starring these little cute Disney characters. The game has become popular and has taken off.

Seeing the popularity of the game, Disney started selling Tsum Tsum toys in Japan. Those sales started to take off too. In fact, Disney has sold nearly 2 million Tsum Tsums in Japan.

Originally, Disney wasn’t sure if folks in the USA would be interested in these toys, so they only ordered a few, but that has started to change. Disney now has started to sell Tsum Tsum in the United States, specifically at Disney Stores, online, and at the Once Upon A Toy store in Disney Springs.

Folks in the United States have started to buy these toys in mass, so Disney is working to make more of them. In fact, sales have been so brisk that Disney has considered bringing in more of the toys by air vs. the typical and less expensive method by ship.

Interestingly, it seems that consumers in Japan have been able to set the trend in Disney toys, just as they did with Duffy the Disney bear.

Would you like to win a medium sized Mickey Mouse and Minnie Mouse Tsum Tsum?

This sweepstakes ends September 26, 2014, so be sure to enter, share your entry with your friends, and encourage them to enter too. It will be a fun way to increase your chances of winning, and give your friends a chance to win too.

Click here to shop for Tsum Tsum at the Disney Store.

Would you like two win a cute Mickey and Minnie Tsum Tsum?