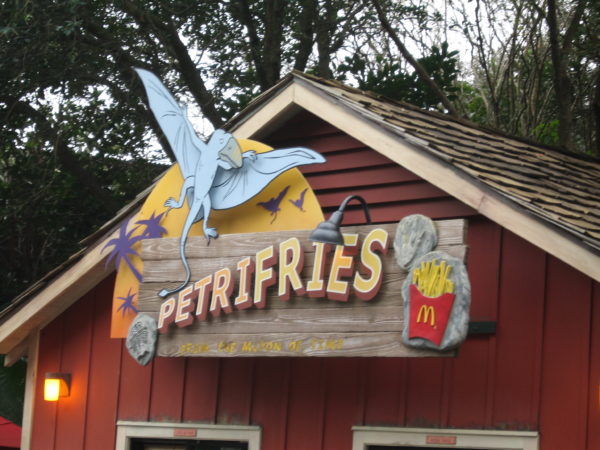 Disney Toys Return to McDonald’s Happy Meals (Could the Golden Arches Come Back to the Parks?)

McDonald’s and Disney established a unique partnership all the way back in 1997. They made a 10 year deal making McDonald’s the primary promotional partner for Disney in the restaurant industry.  The agreement gave McDonald’s exclusive marketing rights to all of Disney’s movies in 93 countries and nearly 19,000 restaurants, which basically meant that all Happy Meals toys were Disney-themed.

During this time, McDonald’s presence in the parks also grew.  Disney opened fry carts Sunset Blvd in Disney’s Hollywood Studios, Canada in Epcot‘s World Showcase, Frontierland and Fantasyland in Magic Kingdom. Dinoland USA in Disney’s Animal Kingdom had both a fry cart and a full-service McDonald’s menu at Restaurantosaurus. Some places served just fries while others served McFlurries, sandwiches, and nuggets. There were also two full-line restaurants at the resort outside of the parks- one in Downtown Disney near the Lego Store and one between Blizzard Beach and Disney’s All-Star Resorts.

After ten years, the agreement expired, and the two companies were still able to work together but with more flexibility.

However, in 2006, Disney decided that McDonald’s meals, and especially the Happy Meals, didn’t meet Disney’s self-imposed nutritional standards and cut most ties with the restaurant – including removing all of McDonald’s food from their parks. It looked like the restaurants would survive the separation, but the Downtown Disney location closed in 2010.

Only two golden arches remained just outside of the All-Star Resorts, and the restaurant received a renovation in 2009 removing the cartoonish look and making it more modern. It continues to serve hungry resort-goers with indoor and outdoor seating from 5am to 1am and via a 24-hour drive thru.

But the story of the ears and the arches doesn’t end here.

Disney and McDonald’s Partner Up Again

Just recently, McDonald’s has decided, likely due to pressure from guests and the industry, that it’s time to give their Happy Meals a healthy makeover. They’re removing cheeseburgers from the options and reducing the size of the French fries offered in some meals. Perhaps the biggest change is coming in the McNuggets, which will now be made with 100% white meat chicken.

These changes will go into effect nationwide by June 2018. At 600 calories or less, the Happy Meals will soon meet Disney’s strict, self-imposed dietary standards, and Disney has decided to again offer toys bearing their intellectual property.

Incredibles 2 toys will roll out this summer, and Wreck-It Ralph 2 toys will be released in November. The deal will not be nearly as restrictive as the former agreement, and it’s not exclusive, but look for toys from Walt Disney Animation Studios, Pixar Studios, and Marvel Studios in McDonald’s restaurants soon!

Could we also see a return of McDonald’s into the parks?