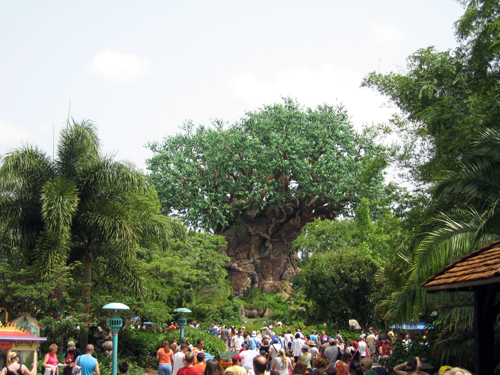 Tour guides have known for quite some time that when given a choice, most people will go to the right. Psychologists don’t know why this happens more often than not, but theories include the fact that we drive on the right side of the road and that the majority of us are right handed. It’s more natural for us to do things with our right side, and most of the time we don’t even think about it.

Disney knows this too, and uses it to its advantage for crowd control and increasing profits. This is most obvious in Magic Kingdom’s Main Street and Hollywood Studios’ Hollywood Boulevard. In both cases, the coffee shops and bakeries are on the right side when entering the parks. When leaving the parks, the right side is filled with gift shops. This leaves the left side almost completely empty at the respective times.

Armed with this new information, I can highly recommend based on personal experience that you should turn left whenever possible. Sometimes it’s fun to be different!

This may be most beneficial at Magic Kingdom in the mornings.

Your first stop will be at the entrance stanchions. If you look at the stanchions on the left, the lines are often as much as 50% shorter than the lines on the right. Turning left will save you time because you’ll probably be able to enter the parks at least a few minutes before the people who insist on following instinct.

Once in the park, head to the hub and go left into Adventureland. Unless you have dining or FastPass+ reservations in Fantasyland or Tomorrowland, you will greatly benefit from going to Adventureland first. I would suggest going all the way to Big Thunder Mountain and Splash Mountain first. On one visit to Disney World, I was able to walk on to Splash Mountain two times before I had to wait in line a third time. Big Thunder Mountain will have a similar experience. Since Adventureland is one of the last stops for most people, you will be able to experience the area almost completely by yourself seeing and doing more in the first hour than the other people who aren’t quite as smart as you!

After getting your fill of Splash Mountain and Big Thunder Mountain, work your way back through Adventureland to the Hub. Then, head to Tomorrowland and Fantasyland. Since most people experienced this area upon entering the park, the lines may be shorter than they were early in the morning. It’s also a good idea to schedule FastPass+ experiences (especially in these locations) for a couple hours after park opening since this is when lines start to grow.

The same concept works well at Hollywood Studios. If you are a Star Wars fan, take the first left after entering the park then take a right past Indiana Jones Epic Stunt Spectacular. Head to Star Tours, and enjoy multiple walk-ons before a line forms. Since the ride has so many variations, riding multiple times will be many different experiences.

After enjoying many attractions in the morning, head back to your hotel for a lunch and a mid-day break for a nap or a dip in the pool. Lines will be longest and the temperatures will be highest at this time. After a little R&R, head back to the parks and go right. Since most people did that in the morning, you’ll experience shorter lines on the right side of the parks in the evening hours.

How do you avoid the crowds and lines at Disney World?
Leave your comments below.