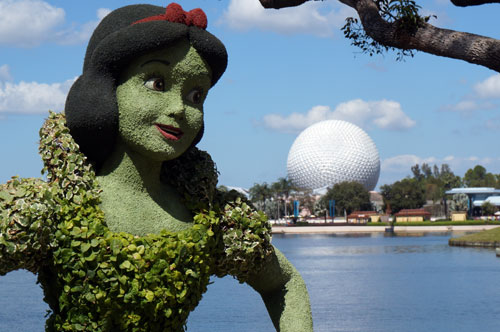 It should come as no surprise that the topiary in Disney Parks date back to Walt Disney himself and his first park, Disneyland.

After a trip to Europe where Walt saw these impressive plant statues, he called on his Imagineers to create similar structures in Disneyland. Despite the fact that these things traditionally took several years to make, Walt wanted them quickly, and by 1963 there were a couple dozen throughout his park.

The tradition continued and expanded to Disney World, and in 1993 the Epcot International Flower and Garden Festival began. Since then, the show has expanded every year not only with the topiaries but also with concerts, kitchens, and days. The 2016 show is now 90 days long running from March 2 through May 30.

The Making of the Topiaries

Disney horticulturalists work for around three months per topiary, but the plant statues are made of much more than just plants.

Topiary must have a strong base to function properly and look nice for so long, and they must be designed well. Imagineers work to design the figures then skilled welders enlarge the design to make a sturdy frame. All plants must have water to survive, so irrigation specialists are required to provide this necessary nutrient. Finally, gardeners stuff and plant the frames. The creative gardeners also use dried moss of all different colors, palm fibers, and seeds to create facial features, clothing embellishments, and an array of other accouterments. All of this is so involved that Imagineers start planning next year as soon as this year is up and running.

Once the show begins, the horticulturalists work diligently for the next few months to keep the topiaries looking their best. In fact, they prune and replant every night after the park closes to keep the 100 topiaries fresh and full.

The welcome scene sets the tone for the rest of the festival, so the teams work really hard to make these perfect. This year, Huey, Dewey, and Louis along with Donald Duck and Daisy welcome guests to the 2016 International Flower and Garden Festival.

Many of the topiaries change every year, but there are some that are so beloved that Disney brings them back every year.

Phineas and Ferb and Toy Story’s Buzz Lightyear return to Future World East while a Fantasia scene appears in Future World West. Ranger Mickey is added this year to commemorate the 100th anniversary of the National Parks Service.

Minnie & Pluto welcome guests to the World Showcase in the Showcase Plaza, and Anna and Elsa stand in Norway while their new ride and character meet and greet open in the pavilion. Simba and Friends say Hakuna Matata at the Outpost, Snow White and the Seven Dwarfs march in Germany, Lady and the Tramp celebrate love in Italy, and Beauty and the Beast do the same in France. Cinderella and Prince Charming join them there while Winnie the Pooh and Friends and Peter Pan, Hook, and Tic-Toc-Croc are in the United Kingdom. Bambi and Friends chill out in Canada, and Disney Pixar’s Woody brings it home in the American Adventure.

If you want to know more about these amazing artistic creations, head over to the show and meet with the horticulturalists themselves during seminars. You might even get a chance to ask them how to create your own at home!

Do you enjoy seeing Disney’s topiaries?