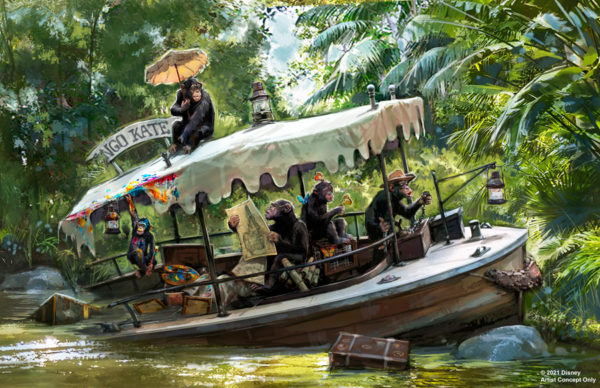 Disney has announced that they will update the Jungle Cruise attraction in both Walt Disney World and Disneyland.  They plan to offer “more humor, wildlife, and skipper heart – and also reflect and value the diversity of the world around us.”

Disney plans to keep a focus on the humor that was part of the original design by Disney Legend Marc Davis while enhancing and connecting the storyline and sharing more backstory.

You will learn more about the characters you see including a birdwatcher, an entomologist, a wildlife painter, and a photographer.  For the first time, Disney will add an animatronic skipper.

A new scene will include a family of chimpanzees on the wreckage of a boat.  They will look like they are mimicking Disney park Cast Members and guests.

Walt Disney Imagineer Chris Beatty has stated that the attraction makeover is not focused on the upcoming Disney Jungle Cruise movie with Dwayne Johnson and Emily Blunt, although there may be Easter Egg references to the film.

Disney also said they will expand the script, but keep some elements – like the backside of water.

There is no announced target date for the changes, but Disney is targeting this year.

Excited for a makeover of the Jungle Cruise?