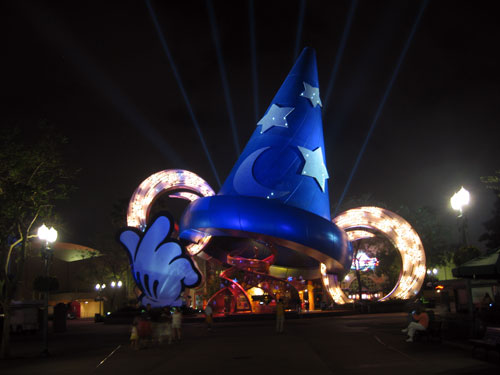 The giant sorcerer’s hat showed up in 2001. We have confirmed information that it will come down in 2015.

Disney originally installed the giant replica of the Mickey Sorcerer Hat from the film “Fantasia” back in 2001. The official reason Disney used to install the hat was as part of the “100 Years of Magic”, which was a 17 month celebration of the 100th anniversary of Walt Disney’s birth.

The 122 foot tall structure has been controversial ever since.

Many fans didn’t like the idea that the primary icon for the theme park housed a Disney pin trading store.

Others had more philosophical concerns. The hat drastically changed the sight lines that Imagineers carefully planned for guests as they entered the park. The Imagineers planned for guests to enter the “Hollywood that never was and always will be,” with great attention to architectural details and “place making” to transport them to California in the 1940s. The hat, some say, simply didn’t fit into the story. Why was a sorcerer’s hat in the middle of Hollywood, California?

Since Disney’s Hollywood Studios, or originally the Disney MGM Studios, opened on May 1, 1989, there was also confusion about the official icon for the park.

Some early brochures and park merchandise featured the “Earful Tower”, the 130 foot tall water tower with enormous Mickey ears. For an icon, however, the tower was very inaccessible. Guests only saw the tower from afar or as they quickly drove by the tower during the back lot tram tour.

Other early Disney communications featured the Chinese Theater at the end of Hollywood Boulevard.  To some, the Theater seemed like a second icon for Disney’s Hollywood Studios.

Whether you love the hat or hate it, whether you believe the tales that the hat was a way to deal with legal issues or just sell more Disney trading pins, it will soon be gone.

Two sources have confirmed the information that Disney has made a final decision to remove the hat:

WDWNT reports that Disney sent a message to Cast Members noting that the park’s central hub will be redesigned, and as part of that work, Disney will remove the hat in early 2015.

Separately, ClickOrlando reports that Disney Spokesman Bryan Malenius confirmed to Local 6 News the information that the hat will come down.

At this point, Disney has confirmed the following major changes to Disney’s Hollywood Studios:

All these changes mean that there is a lot of space around Toy Story Midway Mania now available. Disney has basically confirmed some big changes are coming. What will they be? Will Disney open a new Star Wars Land? Are they planning for a new Cars Land sometimes referred to as Radiator Springs East?

The next few years will definitely be interesting times for Disney fans!

Did you like the Sorcerer’s Hat at Hollywood Studios? Will you miss it?