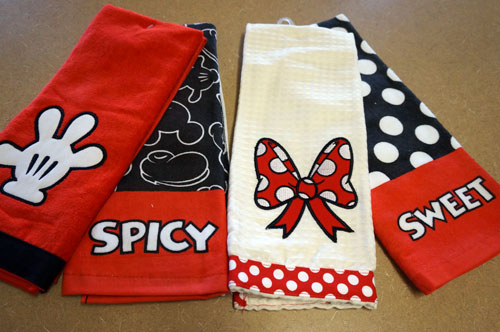 Disney has been coming out with lots of new merchandise lately. I know that is an ongoing process that happens all the time: new pins, new mugs, new t-shirts.

However, much of the most recent merchandise has been either more specific to resorts or attractions, or a bit beyond the typical t-shirts and mugs.

The last big example of this is when Disney opened the Marketplace Co-Op in Disney Springs. The Centerpiece store offered an entirely new level of Disney-themed merchandise for the kitchen and home.

Disney seems to be running with the concept. I recently spotted a series of kitchen towels in the Emporium, on Main Street USA in the Magic Kingdom.

The towels come in pairs with two different but similarly-themed towels in each pair. A pair of these towels costs $18.95.

Would you like to win two Disney kitchen towels, with a Mickey Mouse and Minnie Mouse theme?

This sweepstakes ends July 25, 2014, so be sure to enter, share your entry with your friends, and encourage them to enter too. It will be a fun way to increase your chances of winning, and give your friends a chance to win too.

Want to know who won?  Check out the winner’s page.

Would you like to win some Disney-themed kitchen towels?