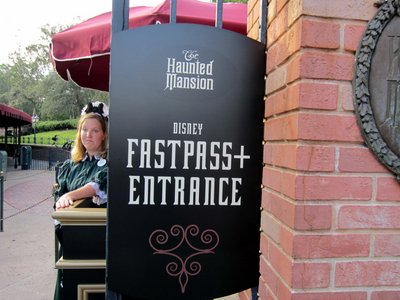 Disney Testing New FastPass Plus System In The Magic Kingdom

Since the concept of the theme park was invented, the thing that most people didn’t like was standing in line. Disney worked to make the waiting experience better by providing amazing theming. They also developed the original FastPass system to allow you to effectively schedule a time to ride. However, their latest work on the new FastPass Plus system may completely change the game on how we experience theme parks.

FastPass Plus is part of the $1 Billion Disney has dedicated to a project called NextGen, which is looking to completely overhaul the theme park guest experience – from before leaving home through the in-park experience and until you get back home. Disney has been testing many difference components, including the use of RFID technology. Recently, Dis Unplugged (Source) wrote up some of the details about how this latest test worked, and I myself was able to take a few pictures around the Magic Kingdom of some of the new hardware that was part of this FastPass Plus test.

Like so many changes, Disney has been testing this new system to make sure they have it right, that it works, and that it is well received.

Randomly selected guests who booked Disney’s Magical Express as part of their vacation were selected for the test. About a week before they were scheduled to arrive at Disney World, they received a package at home that included the new FastPass Plus cards (embedded with RFID technology) and instructions on selecting four experiences. The mailing showed these lists:

Select two experiences from this group:

And also: Select two experiences from this group:

I think it is interesting that several of the experiences were not attractions at all but shows and parades. Historically FastPass has not been available for these events. Disney has reportedly done tests of reserved seating for parades and fireworks shows (Source). I do like this idea, since to get a decent viewing spot you normally have to camp out an hour or more in advance. Also, I saw a roped off viewing area for the Main Street Electrical Parade directly in front of Cinderella Castle. I thought it was unusual, and assumed it was for VIPs for handicapped access. But it may well have been part of the FastPass Plus test – for those who scheduled the parade experience in a advance, they could go to the reserved viewing spot and get good seat without a long wait.

There was a web site at https://fastpassplus.disney.go.com where the selected guests went to sign in and make their selections. The online process allowed guests to not only select the experiences but also adjust the times for them based on selections presented (Source).

If they didn’t make their selections before the left home, there was a station set up at the Orlando International Airport where they could also do so.

Guests then took a printout with one hour time windows when they could visit each of the four experiences they had requested. Near the entrance the attractions I have spotted the new RIFD card readers which were part of the test. They were matched to the attraction, at least in color, but seemed to be the same design at the different attractions. This makes sense, so that they are recognizable as part of FastPass Plus. The design features a Mickey Mouse head logo which lights up in bright green when the RIFD FastPass Plus card is held up near the device. These were similar to the ticket reading devices set up at Epcot as part of an admission ticket test (Source), but the readers at the at the Magic Kingdom didn’t include fingerprint scanners like the ticket readers did.

While this was just a test, it seems to pull together many pieces of previous tests – using FastPasses for parades, trying out the RFID readers, etc. We don’t yet know how the final system will work. And plenty of questions remain. How will Disney handle Annual Passholders? What about guests who visit on the spur of the moment (which is definitely a minority, but it happens)? The concept of reserving experiences before leaving home and enjoying them at Disney World with no wait is intriguing, and may well be the way Disney changes the entertainment game yet again with technology and ingenuity.