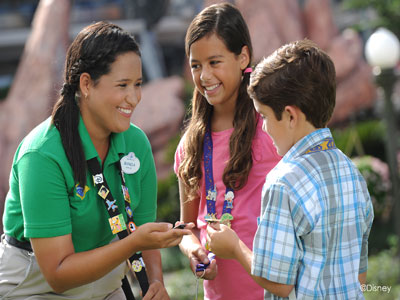 Imagine dreaming about going to Disney World for years, and then finally getting to go.

Once you are there, you discover a problem.  A big problem.

You see, you don’t speak English. You don’t understand what is going on. Suddenly your dream vacation becomes a nightmare: a confusing and frustrating experience.

That situation used to happen much more often than it does now.

Disney collects lots of data about its visitors. A Cast Member conducting a survey may even have talked with you during one of your past trips. This data is very valuable.

About four years ago, Disney noticed a huge increase in the number of tourists from Brazil.

Unfortunately, many Brazilians don’t speak English, and that is where the problems began.

Disney knew this could be a big market, so they took action. They instituted the Super Greeter program, which takes Cast Members who graduated from the Disney International College Program, puts them in very noticeable bright-green polo shirts, and stations them around the parks and resorts.

There are now more than 100 Super Greeters, most of whom speak both Portugese and Spanish – just like the folks they help from Brazil.

You might think that hiring 100 people to help with language translation is a big investment. It is, but it also has a big payback. In recent years, up to 500,000 tourists from Brazil have visited Central Florida. That number was up considerably form past years.

All of those tourists from Brazil spend big bucks at Disney World and the surrounding areas. In fact, studies show that they spend about $700 more per person than the average tourist. Many bring extra suitcases to fill with their purchases and souvenirs since they can purchase more things at better prices in Florida than at home.  Ultimately, Disney realized that overcoming the language barrier would not only be beneficial for the parks but also for the guests.

Should Disney invest in more programs for non-English speaking tourists?